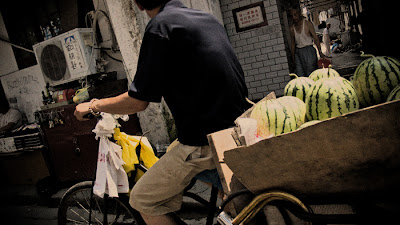 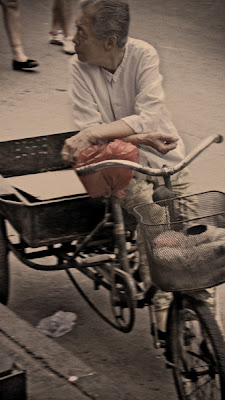 I think of my trip to China, but it is all a gauzy memory. I look back through a fog. China itself was vivid--its skyscrapers and crowded, frantic streets, its odors and fragrances, the contrast between rich and poor. I am an impoverished student of politics and economics. Some time ago, I consciously decided to live through ego. I am subjective to a fault. I look for things, create them out of the merest materials. I won't pretend to be able to tell you about the cultural revolution with any authority, nor even the way that people feel. China is too vast, too complicated for my reductions. I went on a tour and moved through cities on a bus to "must see" destinations. Out the window, I would glimpse the places I wished to go. Green fields interrupted by by wind breaks where workers sat in the shade of trees. Cotton pajamas and straw hats. Old tools, wooden wheelbarrows. History, a bucolic past. But there was no stopping the bus, as we rushed to see the fresh new face of China, whose very antiquities were being feverishly renewed in the interest of tourism.
Posted by cafe selavy at 7:44 AM