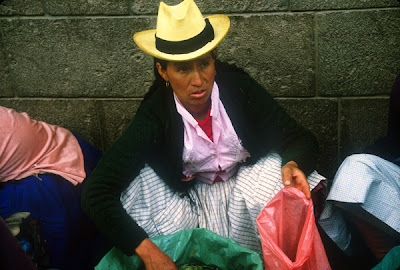 My mind was a riot. Chthonic mysteries lay all about.

In the afternoon, I met Brando in the sunlit courtyard. He was ready to unveil the mysteries. Leading me through the parks and plazas, Brando was a walking narrative. He traveled by Songlines, of sorts, chanting his way through a geographical poem of places and events. This was the building where Ute first. . . Here there is a small bar upstairs where Sondra met. . . You can buy the finest silver jewelry here. Yearning. The closer we came to the town's main square, the faster and more erratic my own heart beat. Crazed. Scared. Nervous. There would not be enough time or luck to live what Brando described. Somehow, I would not be capable. I would be an ordinary failure. 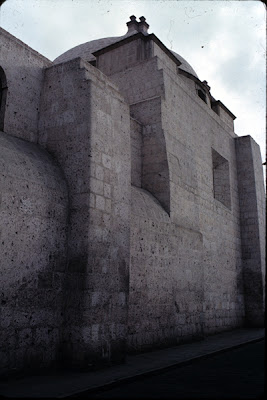 At one end of the plaza stood the temple and cathedral. Koriancha, Temple of the Sun. The Cathedral of Santo Domingo was built by the Spaniards on top of ancient Incan walls. On three sides, the square is lined with businesses—restaurants and shops. We plunged into the crowd. I spoke little Spanish (tourist phrases mutilated) and no Quechuan. 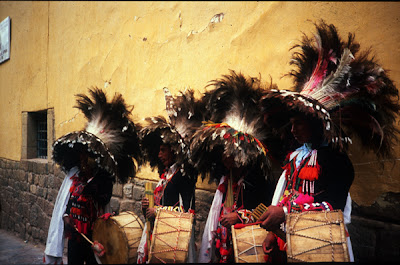 The central square was extraordinary, Spanish architecture atop Incan stone. The center was a grassy park with walkways and benches surrounded on two sides by European colonnades and on a third by a cathedral. The square was packed with revelers. Color. Music. Babel. I spoke little Spanish (mutilated tourist phrases) and no Quechuan. Brando pulled me into the Piccolo, a restaurant open day and night serving breakfast, lunch and dinner at a horseshoe-shaped wooden countertop bar. I would have my first in an endless series of Bologneses there and then. There was a woman in town, a true beauty, on whom Brando would pour his money and attention. She worked at a jewelry store, or perhaps she owned it, she or her family, and for her there would be no compromising. And then across the bar on the other side of the room, I saw the girl I had come there for, a large-boned German with crazy hair sitting with a fellow in a black motorcycle jacket. She would not look at me it seemed, and I could not catch her eye. I pointed her out to Buz, but his attention was consumed by the dark-haired woman. Our food came and we had just begun eating when the Germans got up to leave. The girl stood, following her fellow out of the café without giving me a glance. I was not a man like Buz, I thought, no Lothario, no Cassanova. I gazed at her back framed in the doorway as she stood facing the plaza, one hand on her hip, silently waiting as the boy tried kicking his motorcycle to life. And then, just as she prepared to swing her long leg across the seat behind him, as if in a movie, she turned her pretty face toward me, gazing for just a moment before she smiled and waved so long. And then they were gone. 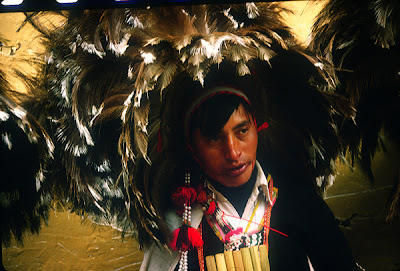 “Did you see that, Brando? Did you see that? Did you see her smile?” He had, or at least said he had, and I was able to revel in the warmth of my first near-encounter with The Promise. Travel and romance.
Posted by cafe selavy at 7:45 AM