On the Margins of Things 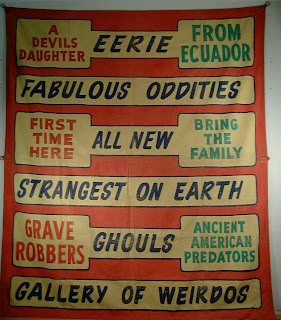 A rather serpentine fellow I barely know approached me the other night on the street, and out of the side of his mouth he said as if we were being followed, "I've got just two words for you." I stood still, looking expectantly at him. And at length, he came closer, glanced around, and quickly proferred, "Gelato." He stared directly into my eyes. I waited a minute, then said, "That's one word." "What?" he murmured. "I said that's one word." "What do you mean?" he shot back. "Gelato--that's one word," I tried to explain. Things were getting weird. Finally in some sort of primal frustration, he whined ruefully, "I'm just saying."
It reminded me, for some reason, of a beautiful afternoon at a sidewalk cafe where a pretty girl sitting at the table next to mine delivered to her companion, in the course of a high-pitched conversation, her culminating tour de force: "Well, it's like daddy said, you've got to take care of yourself 'cause it's a doggy-dog world."
I don't know whether the fellow in the street was drunk or just trying to fuck with me.
We all have characters on the margins of our lives who we can scarcely remember, whose names we don't know. It is best to make note of them, I think, lest it all be lost.
I'm just saying.
Posted by cafe selavy at 9:23 AM