Literary Cabs and the Course We Pursue 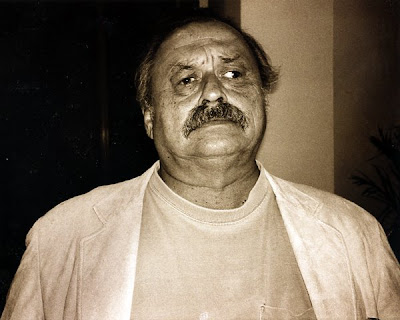 F Blog just put up this photograph of Jim Harrison on their site. You can read the essay I wrote for them there. I will tell another story about the same conference here.

In 1996, I attended a writing conference in Key West whose guest authors included Rick Bass, Annie Dillard, Gretel Ehrlich, Jim Harrison, Thomas McGuane, John Nichols, Doug Peacock, Peter Matthiessen, and Gary Snyder. Snyder and Matthiessen were prevented from coming by huge winter storms that stopped air traffic west of Colorado. Still, the conference was no disappointment. I had asked my friend Brando along, and he got a big kick out of it. He is a natural attraction and we had many adventures with writers, pirates, and go-go dancers, but I'll save that for later.

One night, there was a cocktail reception at the Martello Museum where, among others, the painting of Russell Chatham were on display. He and McGuane and Harrison were, at that time, the top of the food chain, their adventures in fishing, cooking, eating, and drinking much mythologized in magazines like Esquire and Smart.
When we caught our cab, the driver asked us if we were part of the writer's conference.  She seemed to know much about it and the writers and offered that she wished she could go.  Then she dropped a bombshell.  She had been McGuane's girlfriend in the '60s when he lived there and was writing "Ninety-Two in the Shade."  Later, they stayed friends until he left Key West for good.  When we arrived at the reception, a sudden impulse took hold and I asked her if she would like to come inside.  She was ratty looking as she came to work after a day on a boat, wearing an old, baggy t-shirt, cut-off jeans, and a baseball cap, and she opined that she would not be allowed inside.  I told her she would be alright as long as she was with us.  She looked at me quizzically, so I said quickly, "Don't you know who we are?"  Without further conversation, she parked the cab and we got out.  Brando and I put her close between us and I said, "Stay right here and don't look at anyone until we get inside."  There was no trouble, of course, only me making drama.  Inside, I got her a glass of wine and we began looking around, and there before us stood McGuane and Chatham with a large group of sycophants.  Without thinking, I shouted out, "Hey, Tom, look who it is?" and our cab driver stepped forward sweet and shy and said, "Hi, Tom."  The sycophants looked confused, their faces flashing from the apparition of the cab driver to McGuane and back trying to get the lay of the land.  McGuane's own face was an awful sight as he tried to comprehend what was happening.  At last, it seemed he got his feet back under him and he offered his hand and a forced hello, at which point the crowd began to break.  Brando and I left the two love birds there to talk over good times, me feeling a saintly sense of accomplishment and goodness at the kind thing we had done.
But Brando was looking at me as if I he had just seen a monster.  "Why in the fuck would you do such a thing," he said.  "What?"  I was confused.  "Jesus Christ, man, he looked at you like he wanted to kill you.  Why would you take her up there like that?"
I had only been thinking about how sweet our cab driver was and how wonderful it would make her feel.  Maybe it didn't turn out so well.  I don't know.  Sometimes it seems that you just can't win.
Posted by cafe selavy at 9:21 AM