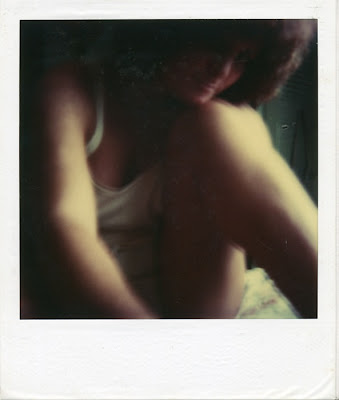 I was going through an old grocery bag filled with letters and poems yesterday. The bag came apart in my hand. I don't know what is wrong with me, but I am unable to organize things, so I throw them into whatever is at hand and there they stay for years and years until time and circumstance forces some further action. Among the things that fell to the floor was an envelope full of pictures, some Polaroids and old photo booth strips. They were long forgotten. I could not have told you they existed. The photographs were of an old girlfriend. What a horrific term. We were tumultuously together for eight years.

I fell for this girl when I was twenty-five. I already had a girl. But I lived in one town and my girlfriend lived in another, so I simply fell. It was wonderful, this falling, like floating in wind, the increasing velocity, the crazy view, like flying in your dreams. She was a big, beautiful girl who had set the state track record for the mile. She possessed a natural glamor, so that when a man walked past her in the street, something would happen to his inner ear and he would briefly lose his equilibrium. My life was charmed, I thought. I would spend weekdays with one woman and then drive the hundred miles to spend the weekend with the other.

I don't know what makes a person think he can do such things. Eventually my longtime girlfriend finished her graduate degree and moved to town. One day, I came home to find all of the stuff I had at her house piled outside her door. Inside, I found her in the tub, soaking, crying. I quit falling then. It was the first wrong thing I had ever done in my life. You are skeptical, but it is true. I can still hear the thud of the impact. There was no more flying. From then on, I had to learn to walk.
Posted by cafe selavy at 7:47 AM