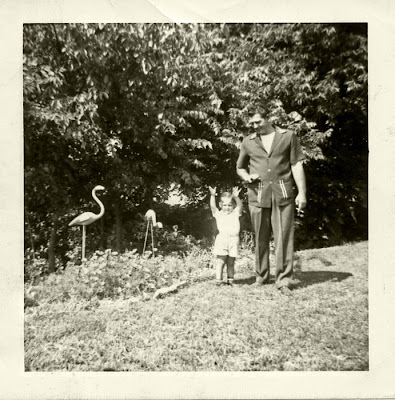 When I was very young, my father often said things that confused me. He used to call people "kiddo," for instance, as in, "OK, see you later, kiddo." Maybe it is kid-o. The closest I could come to that word in my vocabulary was "kettle," and I could not understand why my father would refer to people as "kettle." But of course I never asked.

I used to look forward to my father coming home from work because he brought me treats, just silly things like Black Jack chewing gum or a big, hot soft pretzel. One day he came home from work and told my mother he had been pulled over by a policeman. The police were not good guys in my family, my father's side having some very shady members, so I was all ears. He went through a list of things that I wasn't sure of and concluded by telling her, "The son of a bitch threw the book at me." I was too young for metaphor, and the injustice of the literal act stuck with me.

These linguistic tricks took place when I was four or five. Nobody in the family ever recounted these tales. Funny that I still remember them.

My father used to sing a song to me that I thought was just gobbledegook, just nonsense sounds to succor a child.

I heard the song as an adult, and of course it went:

There are not many photographs of my father and I together. Here's one.
Posted by cafe selavy at 10:13 AM