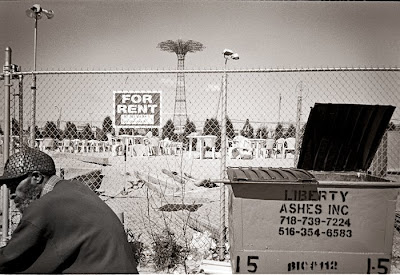 I went to New York for mixed reasons. Running from, running to. Bad flight and late arrival.

Q agreed to go to Coney Island with me on Friday. I had not been there since 1975. This would be its last summer. It would be torn down at the end of August. I wanted to photograph it again, better. Q said we should go early. We were there by eight. And we wondered why. We walked the boardwalk by shuttered stands, shut down rides. Some of the operators were just waking up, getting out of the cars in which they had been sleeping. They looked rough. 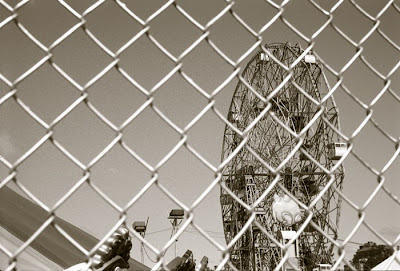 Few people were about. Most of them were elderly. We looked for a place to eat, but nothing was open. We went into a Russian restaurant. People were eating, but the waitress told us that they were not open. We left the boardwalk and went to the main avenue of Brighton Beach. Russian. The only things open at nine in the morning were liquor stores and beauty parlors. 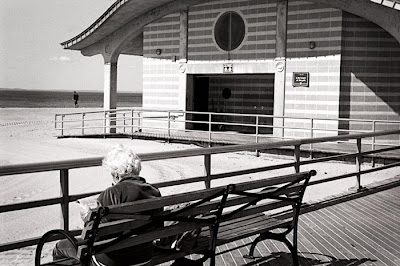 We made our way back across a park. There was some sort of festival about to begin with a stage, games, music. A fellow with a microphone was asking everyone if they were having a good time. Then a band began to play.

Now Q and I are very romantic, liberal, and caring people, but we are also a bit rough, especially when we are together, and our talk is full of unrighteousness. One of us said, “What in the hell is going on at this time in the morning? Must be a bunch of retards.” And no kidding, as we approached, it came to us that something wasn’t right. There were giants and dwarfs, and people just weren’t moving normal. The band was playing Israeli music. Many of the men had Hasidic curls and stringy, untrimmed beards. It was some sort of festival for the Jewish handicapped. We stood in embarrassed wonder watching people run about the large, open park, throwing Frisbees and kicking balls, all orchestrated by middle-eastern melodies.

I stood there with my camera. It was a scene out of an Arbus essay, but I couldn’t do it. 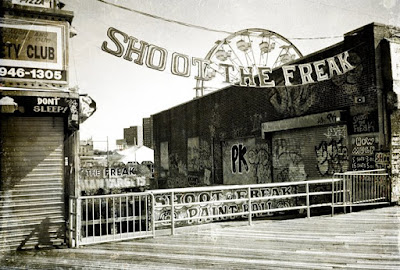 As we stepped onto the boardwalk, one of us screamed, “What a fucking place. It’s awful, awful. What do these people do but drink and get coifed and go to retard festivals.”

There was a woman walking in front of us holding a boy’s hand. They walked slowly, purposefully. No, no, no, it couldn’t be! The boy was not right. Something was wrong with him. My body was rigid with horror and fear. I hoped helplessly that they did not speak English. 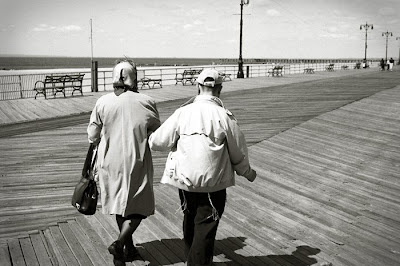 “They didn’t turn around. They don’t know who said that,” one of us said with great remorse. 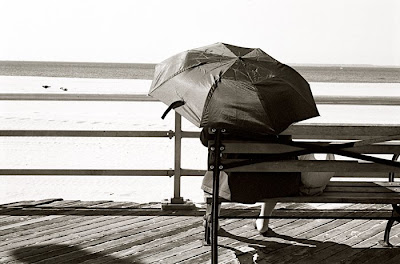 Now there were people beginning to mill about. The stands were raising their shutters. Busloads of school children were going to the aquarium. The chill air began to warm, the breeze to die. One of us bought a hotdog at Nathans. 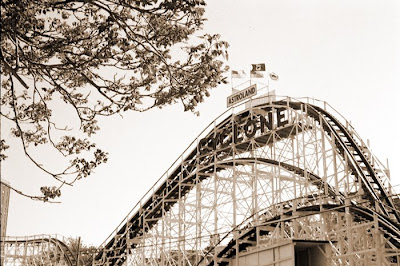 The day before, there had been a demonstration by protestors wanting to save the amusement park. The beaches opened the next day. So did the Burlesque and Freak museum. I had come especially to see that. We were wrong. We had come too early. We had missed everything.
Posted by cafe selavy at 10:04 AM