How Leica Saves a Weird Sunday


My last morning in Albuquerque was spent drinking coffee, writing, and eating.  I was slow to move, slow to leave.  When I finally went down to breakfast, the room was full, so I strolled outside to eat at the place across the street.  I was sure I could get bacon and eggs there. 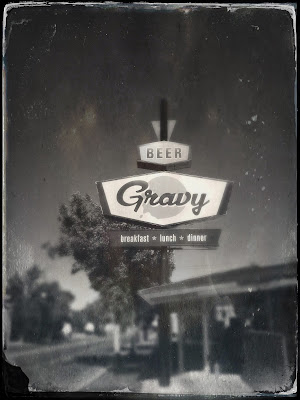 I sat at the long counter on a high stool and ordered three eggs over medium, bacon, toast, and orange juice.  The portions were substantial. 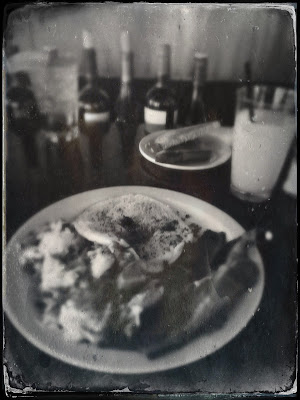 But I ate it all, the first time I've had such a breakfast in many, many months, now subsisting on steel cut oats and yogurt most mornings.  I knew that this would hold me until dinner. Packing up the room, I felt a little lost.  I liked the hotel, and now I would be going to my home for the next week, a $55/night room at the Santa Fe Suites.  Just after noon, I paid up and put my bags in the car.  I would take the Turquoise Highway to Santa Fe.  I had been told that if I was looking for '50s America, this is where I'd find it. It was a pretty road, but that was all.  The little towns that dotted the map were just little towns like any others in New Mexico, old and hippy/cowboy beat.  Cerritos had a petting zoo where a family was feeding grain to a llama.  In another, Madrid, the strip through town was crowded with tourists who walked from one shop to another or who sat in rustic restaurants and bars as you would see in any tourist town. 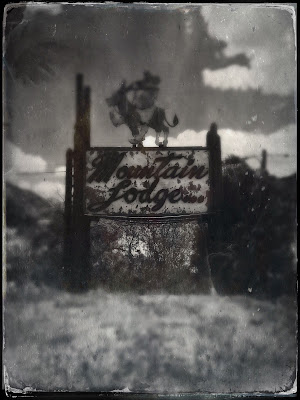 And so to Santa Fe. Getting off I-25, I was surprised to know just where I was.  In a mile, I found my motel.  It was two o'clock, and I was able to check in.  Looking across the big parking lot that ran to the shopping center and to the numerous medical buildings that neighbored it, I thought, "For the money, this is not bad.  It really is not bad at all.  I have a kitchen and plenty of space.  I should be happier."  But I was not happy.  A big hollow silence surrounded me.  I can't explain it quite.  I can just feel the difference, can feel myself just on the margin of existence and subsistence. I put my things away and decided to head on to the center of town.  And of course, it was crowded.  Then I thought of something.  I Googled Photo-Eye Gallery and found this. 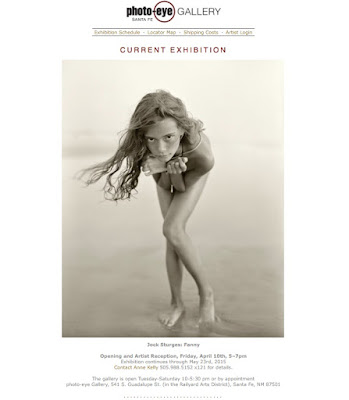 When I got to the gallery, it was closed.  What sort of gallery is not open on Sundays?  Worse still, the show had closed the day before.  I looked longingly through the window to see a giant print, the one that is on the poster, leaning against the wall on the floor.  Another show was going up.  Shit, fuck, goddamn, motherfucker. . . .

Disappointed, I decided to drive to the Photo-Eye bookstore on the other side of town.

Just then, it began to rain.

Thinking not to get my cameras wet, I put on a jacket and walked down to Canyon Road where there is a string of galleries.  I had to do something.  I needed to see some art.

And the first place I went into, I did. 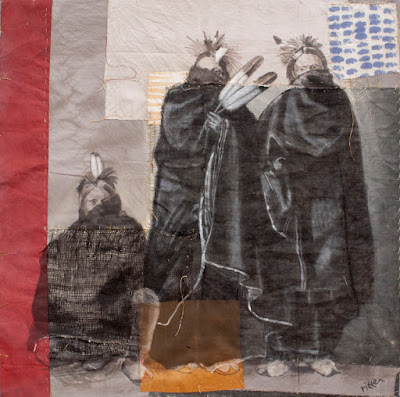 It was the work of Robert T. Ritter.  His images were painted onto fabrics that were stitched together by natural fibers (link).  They were massive, beautiful things.  I wanted one, of course.  $18,000.00.  Oh, I knew I could get the price down, for I heard the gallery owner talking to another couple.  He was willing to throw in the price of shipping.  Let me consider it, I told him after awhile.  Hell, he couldn't know that I was a simple factory worker.  Let him think I might be back.

Outside, the temperature had dropped.  I walked into other galleries, but they were mostly schtick.  I decided to head back to the car and drive to the center of town.

I parked by some municipal building.  I was feeling glum, but what else was there to do but to join the throng.  I didn't think it was practical to take both cameras, and in truth, I thought it really useless to take one at all for days had gone by without my making a meaningful picture with them.  But fuck, I couldn't just walk into town without one, so I settled on the Leica.  It was small and light and I loved just holding the thing.  I grabbed one roll of film out of my bag and covered up the camera bags with maps and a jacket.  There were bums all over town.  I didn't need a break in.

After a few blocks, I couldn't remember if I had locked the car or not.  Surely I did, I thought.  I didn't feel like walking back.

When I got to the town square, many hundreds of people were milling about.  I stood against a wall, thinking.  A man and woman with two dogs stopped.

They admired the camera and asked questions.

And that is how it started.  A few minutes later, another man stopped me to look at the camera.  Oh, the thing is a beauty for sure, and now I was hot.  I walked around the square stepping up to people and pointing to the camera just before I raised it to my eye.  Again.  And again.  I was going well and getting bold.  Two men sat on a bench, characters, really, talking to a man on the bench across the sidewalk.  I sat next to him and smiled.  I said, "You two look like some interesting guys," and raised the camera to my eye.  They just looked at me as I shot.  It was a miracle.  I ran through the roll quickly.  I could have cursed myself, of course, for not having brought more film, but who knew?  And the afternoon was rolling away and I wanted to get something to drink.  I asked a woman leaning on a lamppost outside the store she worked in where my favorite New Mexican restaurant was.  I couldn't remember the name, but she knew it by the description.  The Shed.  She told me how to get there and asked me about myself, and, of course, the camera.  I asked her if I could take her picture.  Oh sure, she said.

Heading across the square, ready now for a margarita, I came across an old fellow with brown skin and white hair who was trying to get his smoker onto a trailer.  I wanted to take his picture and he was asking for help pushing the big wheeled thing onto a trailer.  We made a deal.  I pushed the smoker.  He posed.  It was a good deal.  We shook hands, and I headed for the restaurant, happy.

La Fonda is an historic old hotel just off the plaza.  When I was here two years ago, the rooftop bar was closed for renovations.  I decided to go.

Oh, the wind was blowing up there, and the air was chilly.  I chose to sit on a couch by a fire pit.  I ordered the first drink on the menu, some sort of margarita with chilis.  I sat with my camera and my drink.  The sun was bright, the moment lovely.
Posted by cafe selavy at 8:10 AM