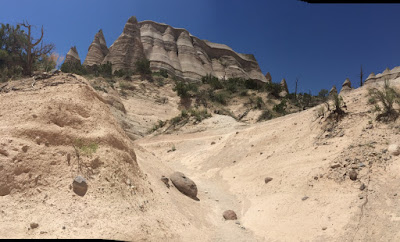 My last full day in Santa Fe, I woke too early feeling. . . strange.  Perhaps it was only the thought of this being the last day of freedom which is in itself an oppressive thought.  All morning, I was getting messages from the factory asking me when I was coming back.  Not just that.  I was working, in part. The strings of home were pulling.  Not knowing what to do, I decided to take a trip to Tent Rocks National Monument.  It was less than an hour away, so. . . why not?  I grabbed some hiking clothes and took off late.  By the time I got there, it was noon.

There were two short hikes in the park, and I took the longer one that round trip was only just over a couple miles.  With two cameras and an iPhone, I started out.  All I'd had was coffee and one glass of water.  I will confess to you, dear reader, that since I've been in New Mexico, I don't believe I've had more than a gallon and a half of water.  Incredulous?  Nope, I swear.  True dat.  I believe that I am genetically predisposed to not needing it.  Even when I was a kid and we'd play ball, the other kids needed a water break.  I always wondered why.  But with coffee and a glass of water under my belt, I headed off under the noon day sun to see wonders and delights. 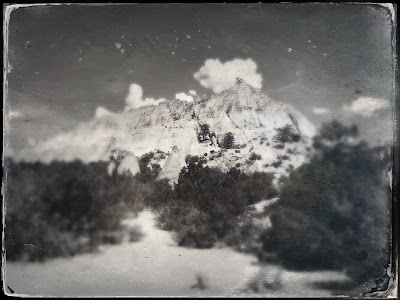 Of everything, I took at least three pictures with three cameras--my digital Canon, my film Leica, and my iPhone.  Of the three. . . Oh, shit, there is nothing like an iPhone.  I navigated my way around the state with it.  I played my favorite music in the car via bluetooth with it.  I played music in the room with it.  And on location, I took photos and effected photos and used the macro properties that neither of my expensive cameras had lenses for, and I used it to take video, too.  And the more I use it, the more I love it.  I even made prints from pictures taken with it in my platinum/palladium workshop.  It is an incredible tool.

And so burdened, I climbed.  It was the first time I'd tried my knee out other than in the gym and on a few short runs.  There is nothing like walking over loose sand and shaky boulders to work your whole body's core.  I have to admit, the knee was doing fine, much to my great relief.  The rest of me, however. . . I am not in such great shape right now.  But I remembered how to move over rock, and the memory was fun.  Up through tight caverns and tunnels, stopping ever to take pictures, people coming up from behind me, people in front. 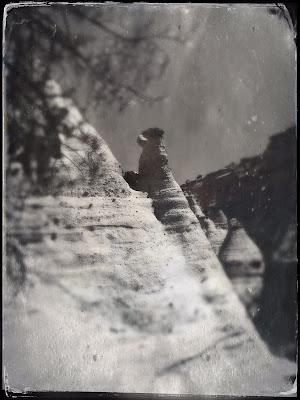 Did I say that I was in lousy shape?  Up and up, it seemed, me with no water or food, constantly losing the most obvious trail in the world as I always do, traveling over hardpan until I didn't know where I was at all until hearing the voices of some happy travelers toward which I would run with weak knees and a beating heart, all the time thinking, "I will get lost out here and die, or worse, will be found suffering by the park rangers, all the time wondering why I am so stupid not to bring water or sunscreen even now that I am getting burned brown and leathery." 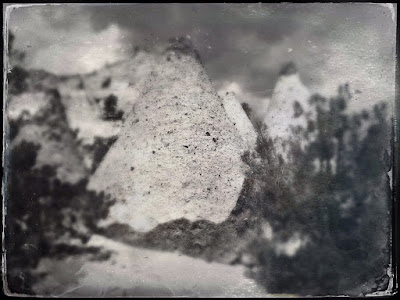 My second favorite camera on this trip is my Leica film camera.  Were it not for the iPhone. . . but truly, I have fallen in love again with the beauty of the thing.  People stop me on the streets and in restaurants to ask me about it.  True!  It has happened at least three times a day since I've been here.  And the feel of it in my hand and the simplicity and complexity of it. . . it is just a marvel.  Most of all, though, people let me photograph them with it, and that is the optimum.  And so when I reached the top of the climb, there were two girls--women, really--who had gotten there just before me.  One of them asked me if I would take a picture of them with her phone, and I said sure, as long as I could take one, too.  They said that was fine.  One of them asked me about my Leica, and a long, long conversation began.  The woman was from Colorado and she loved the idea of film.  The other was from Japan and spoke about her grandfather who carried a Leica with him everywhere he went.  That film camera, my friends. . . it has ju-ju. 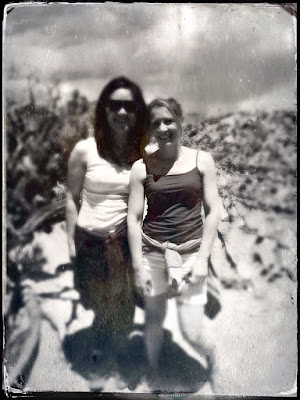 And so we began our journey down.  I took no pictures on the return trip but rather was in my own head figuring out how I was going to change my life when I got home.  Oh so many things.  Knowing, of course, that they would not stick but would, perhaps, be begun.

Back at the motel, I showered and had some wine.  My legs were already beginning to tighten up.  A hot shower and some wine, and I lay upon the bed.  I got up in time for dinner.

It was an early dinner, really, but I had not eaten all day but for a chocolate croissant, and now I should have been famished.  Should have been, but wasn't.  And so in town, I wandered the empty square looking for people to photograph.  Nothing. Zilch.  Nada.  And then the thunder crashed and it began to rain.  I stood under a roof and called my mother, good son that I am.  And when the rain let up, I headed to a sushi restaurant I had already eaten at twice before.  Walking was difficult now, and when I finally came to the restaurant. . . it was closed.  Really?  WTF?  But I had spied a little Italian place down the street and decided that it was where I should go.  Five-thirty on a rainy Tuesday.  The streets were empty.  I spent too much money on a fair meal.  C'est la vie. 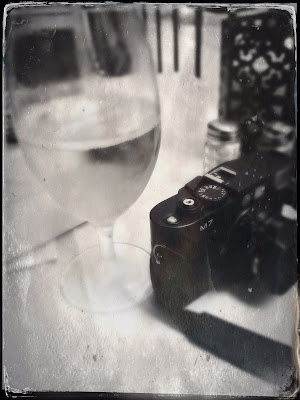 After dinner, sitting alone at the romantic table, I decided to check the next day's flight.

I'd booked a flight on Wednesday rather than Tuesday.  How had I done that?  I couldn't really fathom.  But I must have, for there it was in exes and ohs.  I had to fix this, I thought.  My whole psyche and the psyche of others were geared for tomorrow.  I will call Orbitz, I thought,  and I will tell them.  They will fix it.  They have done that before.

I called Orbitz.  Fifteen minutes later there was no luck.  Another call.  Then another.  I decided to drive back to the motel and check on everything.  I looked up flights.  Shit--Orbits told me that they charged a $40 cancellation fee and that the airlines charged $200.  Really? ! ?  In the end, Orbitz was going to charge me $450 to change the ticket.  American Airlines was charging $250 for the flight.  It was clear what I would have to do.  And so. . . I booked it.

It had taken hours, and now I was exhausted.  Worse, the booze was gone!  So I walked the two blocks to Albertson's to get some ether. . . I mean whiskey.  Being impractical, though, since I was leaving now in the morning, I settled on a $9 bottle of vodka and some tonic.  I would leave the leftovers for the maids.

And so, there it is.  I will be going back to the factory tomorrow after all.  I will fly in on the Full Strawberry Moon.  Surely it is auspicious. 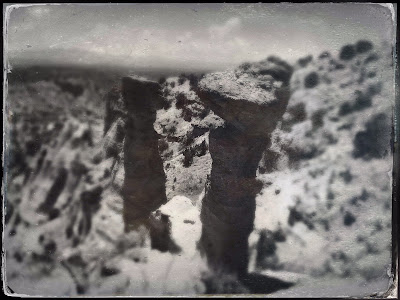