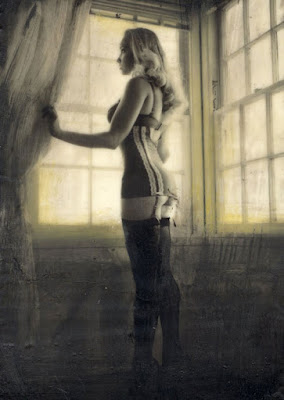 (encaustic photo by Leah MacDonald)
She makes me want to work in wax again.  I've been looking at images online as I searched to see if anyone has done what I am wanting to do/hoping will work for transferring images (nothing online so it probably won't work).  MacDonald's images have some appeal to me.  The way she works the wax is different and she is not adding a lot of extraneous stuff to the images.  I won't criticize the things I don't care for.  I will simply try to steal the things I do.  Now it is simply a matter of making the time to work.  I must clean and arrange my studio and get down to business. Last night after a long week at the factory, struggling through some strange illness every day, I met my friend for dinner at the beautiful sushi place on the boulevard.  The food is good and we ordered the usual things without trying new ones this time, both of us tired and simply desirous of comfort and familiarity.  Beer, sake, tuna kabachi, tuna by tuna roll, seaweed salad, spicy sushi rice, udon noodles, more sake. . . . As we sat by the window talking and talking, a man approached the table and called to me by name.  I didn't recognize him until he introduced himself as the son of a woman I have worked with for many, many years.  I knew him when he was a boy.  He went off to a good college and then to China where he worked in the entertainment industry for a number of years.  He said he had returned to the states, gotten an MBA at Yale and was now working for GM in Detroit.  I nodded my head and smiled at his report and congratulated him for doing so well.  Then I introduced my friend and he asked, "Is this your daughter?"  What a fucker, but he caught me unprepared.  I should have said, no, she is only hired for the evening, or I might have said yes it is, but rather I giggled and said no.  My lack of awareness pisses me off now. And so when he was gone, we talked about that for a minute and my friend wanted to know if that bothered me.  Since I am the same age as her mother, I told her no but wondered about her.  Of course not, she said.  But in bed last night, I wondered. Surely that little fucker knew I had no children.  He always was an evil little kid, I've been told.  His mother, a left wing liberal, raised a boy who became a conservative right wing republican. What can you do. After dinner, we came home and crawled onto the couch.  I wanted her to watch a movie with me, one that I thought embodied the modernist journey in a pretty palatable way--"The Razor's Edge."  We began watching late and the movie is long, so we didn't get to bed until after either of our usual bedtimes.  Now we rise late and are befuddled by the hour.  It is as if we have lost time somehow and must cram all the things to be done into the remains of the day.  But it is a beach weekend and a reading weekend and so we try to slow down and become lazy.  Still, there are things to do and we must do them.  And so. . . .
Posted by cafe selavy at 10:03 AM