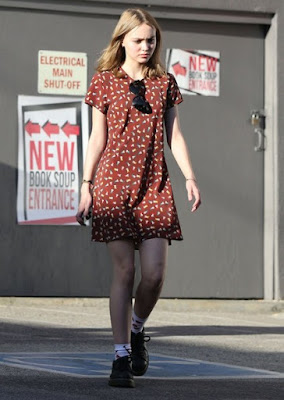 “I see a 16-year-old now, and to ask her to take her clothes off would feel really weird."

I'll give you a while to think about who said that.  It is one of those statements.  It is loaded.  But I should put the quote in context.  It is from this story in the New York Times about teenage models and the fashion world.  The moralists are out.  It is the Women vs the Girls.  Girls, it seems, are stealing the Women's money.  But that isn't the issue, at least as far as they'll tell it.  It is a morality play.

And I agree, just not with what they are arguing.  I think their argument is shallow and stupid.  My argument is about the money.  Money, especially big money, corrupts.  If you can make big money on anything--anything--somebody will do it.  A teenage girl putting on clothes and getting her picture taken is not the problem.  They do that with their friends all the time.  And nudity--well, teenage girls are naked all over the beaches of Europe and nobody asked them to take off their clothes.  Making the argument about nudity is stupid.  What is not stupid is the coercive power of the kopek.  Giving a girl money to take off her clothes might be coercive.  I can concede to that point.

The larger argument, though, is the fashion industry.  I like that term here as a descriptive.  There is fashion as art, no?  Those are the things you see on runways that nobody ever wears, big, constructed pieces, shoes in which nobody can walk, feathers and plastics--the whole show.

Then there is the other thing, the stuff they want to sell us that we can't afford, the things we are taught that we need to be. . . something.  Magazines like GQ and Vogue exist to pimp the clothes.  Fashion experts are there to tell you what is cool and what is not, what you will need to wear in the coming months if you want to be. . . .  They create an insecurity that they can help you overcome.  Pro athletes hire personal shoppers to make sure they look. . . .

From art to industry.

The people speaking in the Times article don't want to staunch the flow of money.  They are not concerned about the larger issue of corrupting the human spirit. They just want to take teenagers off the table and give the money to somebody else, you know, somebody who can handle all of that.

I don't care one way or another, really.  Teenage girls are often pretty and funny and interesting to watch.  They are parrots of the adult world, perfectly and unconsciously learning to master  the culture that surrounds them.  Often in the west, we infantilize them to the point of crippling them in adulthood.  The extended adolescence in American culture is well-documented.  Adults are wicked and corrupt things.  That is well documented, too.  I don't know that we have the formula for keeping adolescents from becoming corrupt ideologues as the years go by.  If we have, it is like the formula for Polaroid film, kept in a secret vault until nobody knows the recipe any longer.

I look at the current field of presidential candidates and am convinced.  It is not just them.  It is us. It is the best we can collectively aspire to.

Whew!  That's a long way to wander, really, from an article on teenage mutant ninja models to presidential candidates as symbols of a rotten existence, no?  I'm not feeling very well today.  I have some grunge that just won't leave me.

And I really don't mind looking at Johnny Depp's daughter.  That is her at the top of the post.  At sixteen, she has just been named the new face of Chanel.  She reminds me of a young Kate Moss.

Oh. . . and that is who owns the quote at the beginning of the post.  Old Kate.  I guess she is as good a source as any out there.
Posted by cafe selavy at 8:55 AM