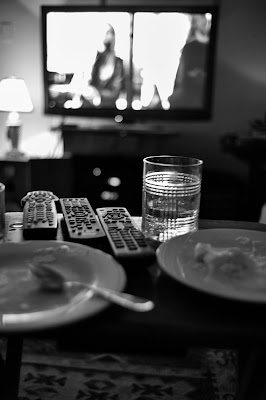 O.K.  I'm just pulling these pictures out of my ass.  My week has been brutal(ish) and long(ish).  The most important feature, though, is yesterday I pulled a Houdini.  I'm carrying myself around on my own two shoulders now.  I love escapes.  When I was a kid, that is what I dreamed of.  All the secret agents and private eyes did that.  They escaped.  So in midnight landscapes, I was running over rooftops and sliding down rain gutters.  I learned early that running was cool.  I became a cool runner and an escape artist.

What you see in the picture is what I escape to--dinner in front of the television with four remotes and a glass of scotch.  Jesus, it's exciting.  I only post it in order to disappoint.  This will become a reality blog.  Reality is the new. . . I don't know.

And so, the last day of a long week, and I must run.  I will stay at the beach this weekend, though, and r&r like I was born to do.  I may download this novel (link).  I have no idea if it is good or not, but I disagree with what the reviewer finds appalling.  I find it most attractive.

If a novel could succeed on detail and observation alone, “Everybody Rise” would be a grand slam. Ms. Clifford, a reporter for The New York Times, has a sharp eye for the rules (salad forks versus dessert spoons) and swag (stationery that is engraved, not printed) of high old-guard culture. She knows that old money drives a weathered 1985 Mercedes instead of a fresh-off-the-lot Beemer and that a Lilly Pulitzer dress belongs in the Hamptons, not the Adirondacks.

And here’s where Ms. Clifford’s story falls regrettably short of [Edith Wharton's "House of Mirth"].  Lily, despite her many flaws is a sympathetic character with a believable inner life. She’s a victim of the ruthless hierarchy and patriarchy of Gilded Age New York. Evelyn, on the other hand, is victimized by her desire to be accepted by a dwindling and ruthless sliver of society, for reasons that are hard to embrace. She acknowledges the follies of this world while falling for it. You can’t forgive her for knowing and somehow not knowing better.

He is wrong.  I can.  I can celebrate her for it.  And therein lies the tale.