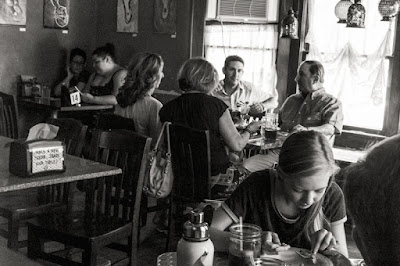 I posted one of my new Monochrom images on a members only website that is by invitation.  Not much interest in it from the members.  The old sinking feeling and the question of why I would do that?  Why would I seek an audience rather than letting them seek me out?  I am like Vivian Maier, I think, but for the talent.  I am secretive and protective.  I guard my tender emotions as best I can.

That is what Ili says, anyway.

But I show the images here because you come.  It is not as if I am coming to your house and knocking on your door to show them to you.

The nudes. . . well those were another thing.  They were marvels to desire and wonder about.  I did, at least.  "How does he do it?" I always thought when I saw them.

But these street photographs. . . well. . . everyone with a camera has a shot at this.  Photos like these just rain down from the sky.

So. . . I understand why the members on that website were not interested in the photograph.  But I don't need to be ignored to try harder.  I am a good critic.  And I am not blaming them in any way.  I am just not good in groups and try avoid them as much as I possibly can.

This is not the image I submitted.  I like this one a bunch, the way it leads the eye from foreground to background, weaving a sort of narrative as it goes.  There is a mystery to it and the lighting is nice, though it is the Monochrom's doing, really, as there was barely enough light in the room to see.  It is a subtle picture that takes some time to look through.

So I proclaim.  And I can do that here for this is my house.

In life, as in art, I am a loner and rarely go to parties and events.  I like to stay at home unless I go somewhere that I am unknown or where I am only a mythical figure as is true in the places I eat or drink.  I am recognized but not known.  People will talk about me without knowing my name, referring to me in descriptive terms.  I do enjoy public places.  But it is a small group that I invite to my home, and these are people I love and trust completely and irrevocably.

To wit, I don't think I'll be the Fuller Brush Man of Photographic Images again.  I won't be knocking on anyone's door.

Besides, I need to find my photographic groove again.  It will only take big balls, money, and a whole lot of time.  I can handle the rest.

No segue.  We are only eight weeks into a twelve week summer, but it is already over.  Kids have already returned or are now preparing to return to school (except for the most sane places in America).  Summer fun is done.  All that is left is the heat.  WTF?  What do public officials have against kids, anyway?  Or is it parents?  There should be one more month of water parks and pools and lakes and rivers and oceans, of daydreaming and falling in love, of summer camps. . . or neighborhood gangs and meth labs and terrorism on the internet. . . .  I did not grow up privileged, but I remember the seasons fondly.  They were sacrosanct and vivid.  There were colors associated with the time of year.  True.  Just look at the old Dick and Jane Readers.  There was a rhythm to life that was circadian.  It leant a measure of sanity or at least an identifiable reason for the other.  Read "Gatsby."  Read your Faulkner.  Summer heat, summer madness.  Summer was for violence, winter for depression.  You can't get that in the Dick and Jane Readers, though.  And kids aren't reading Faulkner.  But it is in Thoreau and Emerson and Whitman, too.  The seasons.  It is why those with money stay at The Four Seasons, Newport in the summer and Palm Beach in the winter (or their weather equivalents) and why the very wealthy have homes there.

I want to see summer through to its end and not have it truncated by political officialdom.  Summer should have its rights, too.  But it seems that summer now wants to transition into fall, that it doesn't want to identify as a season at all.  Climate change, motherfucker.  Get over it.

Again and again, I am revealed to myself, and Ili is right.  I am definitely and totally nothing but a square.
Posted by cafe selavy at 8:29 AM