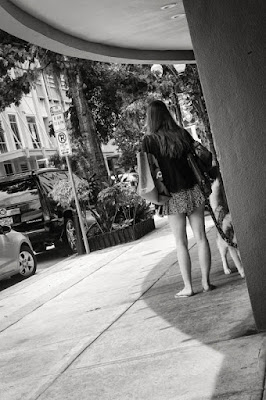 My buddy just bought a Yamaha SR 400, a bike that isn't retro--it's exactly the same as the one built in the early '70s, but it is brand new.  One thing changed, actually.  It has fuel injection now.  The look of the bike is exactly the same.  He drove it over at dinner time yesterday, and I fell in love with it.  I have another object of desire now.  It is a one cylinder "thumper" as they describe it, light and narrow and easy to ride.  Critics say it is perfect at 40 mph though it does sixty.  It costs the same as a Vespa pretty much.  But it is much cooler, I think.  I've been looking at old Honda 350s from the sixties.  Beautiful, but old.  Lots of work.  Not this one, though.  Sixty-six miles per gallon.  It is an "urban" bike, they say, perfect for around town.  I would throw a Leica over my shoulder and be off looking for visual adventure.

He shouldn't have done this to me.

I hear that many of you are having the first gusts of autumn.  Hmm.  There is a week before summer is through, longer here.  But the highs are now dropping into the upper 80s.  If the air begins to dry a bit, it will be fine.  Perhaps we will be able to dine al fresco again.