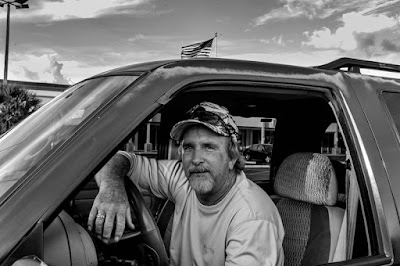 You can only adventure alone.  That is not strictly true, but when you are alone, you confront the world on different terms.  Sunday afternoon, I took my camera out alone.

You (I) can only shoot with one camera at a time.  I have tried to do otherwise, and I tried it yesterday, but in the end, I had to leave the other behind.

Last week, I had to drive out to pay an outstanding air conditioner repair bill.  They don't take credit or debit cards, only cash.  The place was not far away in distance, but it was certainly far in terms of culture.  As I drove out to find the office in a big bunch of warehouses, I thought I had driven back to my youth.  Here it was, unchanged.  It was grimy and dirty and poor.  It was a place without esthetics, at least as I have learned them through time.  Dirt lots, railroad tie planters. . . Maryland Fried Chicken.  There was a glut of used tire shops.  Everything was there--restaurants, toy stores, children clothing--all peeling and in need of care.  I remembered walking by and through these places as a teen knowing that there was something else.  For the teens in this neighborhood, it is only a mile or two away.  But it was true for me as well.  There seemed an invisible fence, electric maybe, that kept me in my place.  You wander a ghetto because that is where you feel at home though it is no home you care for.  You just don't know.

I had to force myself to leave the house.  I'd been going through my vast vaults of photo files, becoming too interested and looking through folders I haven't looked through in years.  I sent Q a bunch of pictures for his birthday, some from another birthday party in NYC many years ago.  He'd just turned 35.  He was already writing me about getting old.  But days can go like that.  My shoulder hurt and I was simply tired.  I didn't care if I went anywhere at all.  But late in the afternoon, rather than going to the gym which I think I will have to eschew for awhile, I took a long walk.  The afternoon was waning and the breezes were slightly blowing.  I ran into friends along the way.

And then I decided I would head back to the place where I paid my a.c. bill.  Late Sunday afternoon.  No one would be around.  The businesses would be closed.  The light would be right.  I showered, picked up what I would cook for dinner, and set a course.  I had eaten two pieces of toast and had drunk two beers.  That was it for the day.  I was set for adventure.

You can walk and take pictures of things--empty lots and abandoned buildings--but the real adventure is in meeting people.  On my first stop as I parked my car and got out with my cameras, I met an African American female who wanted to "borrow' some money.  I told her that I was sorry, but that I had only credit cards, and I told her I had just finished my last beer.  Here eyes sort of lit up then dimmed.  "Hey," I asked, "can I take your picture?"  Oh no, oh no, she said and held her arm in front of her face.  "See," I told her, "that's the way you are.  You wanted me to do you a favor, but when the table is turned. . . . "  "Oh," she said, "I only wanted some food."

I got back in my car and drove half a block to a parking lot at an almost abandoned shopping plaza.  I wanted to take pictures of the crumbling structure under the streaking, dusky light.  When I had finished, I noticed a redneck in a pickup truck looking at me.

"What are you taking pictures of?" he asked.

His expression didn't change, but he said something I couldn't understand.

"What?" I asked approaching his truck.

"It's condemned.  They're gonna tear it down."

"I was hoping they were gonna put a grocery store in there," he said.

"What are you doing sitting here?" I asked him.  He was parked facing the derelict structure.

He pointed to a cage against the wall.

"I put corn in there and the pigeons come to eat it, first one, then a couple more, and eventually when there are six or so, they trip the latch and the door closes.  Other pigeons see them in there and come and push against the door."

"What do you do with them?"  I wondered if he ate them.

"I breed any of them that has white.  I try to get them back to white.  I sell some to the feed stores."

I was wondering what they did with them.

"How many pigeons do you have?"

"I've got about twenty-five right now.  They're the smartest beings on this planet, you know."

He picked up a half full soda cup and spit his chaw.  I noticed some gold teeth and a tiny earring.

"Alright my man," I said putting my hand on his arm.  The hair on it was wiry like a terrier.  "You take care of yourself."

Later, when I had finished shooting and was driving back home, I came to a stop light.  Across the street, I saw the hungry woman who wanted some money an hour before walking into a liquor store.  I guess she was hungry after all.

It wouldn't happen like that if I weren't  alone.  I wouldn't hear or see as much.  I like people and I like their stories.  We are a sorry lot, but we are interesting, too.

I'll tell you more about it later.  Now I have to go pay the bill for my soon to be gone studio.  It is part of the bargain.
Posted by cafe selavy at 8:09 AM