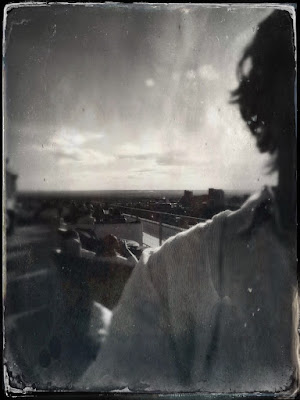 Yesterday the plumber came.  He couldn't fix the leaking pipe under the house.  The crawl space was just too tight for him to reach it under that bathroom that was an addition before I bought the house. Apparently, they did not dig out the dirt there.  Whatever.  I have old copper pipes that get leaks more and more.  The big news came.  I have to re plumb the house.  I won't tell you the price.  Everyone says, "That seems high."  Well, what do you want me to do, tell them how much I'm willing to pay?  I don't see many options here.  I'm camping in the house now as it is with the water cut off at the street.  So I spent yesterday in a state of. . . what shall I call it?  Shock?  I don't know.

Last night Ili and I went to dinner.  I wanted succoring.  We went to our favorite little Italian restaurant and sat at the bar.  One of my friends was there, and he's a good talker.  He takes care of my cat when I leave town, and he met Ili when they were sharing the responsibility.  I hadn't eaten all day and I had gone to the gym just before dinner, so my blood sugar had dropped to nothing, I guess, plus I was still in shock/depression, so I couldn't hold up my end of the conversation.  A little later, though, after the first glass of Classico and some bread and olive oil, and maybe after the Arugula salad and the first bites of chicken, I was making a small comeback.  I told him about the news I had gotten that day.

Just then I got a phone call.  It was from the real artist in the studio behind mine.  "What's up?" I asked.  He gave me the news.

Seems that the warehouse studios that we rent has been sold to a developer.  We are all going to have to move.

I try to look on the bright side of this.  The money that was going into the studio can now be spent on house repairs.  Plus--I was just about to buy a whole lot of equipment to be able to do gum oil prints.  I was looking at another large format printer and a U.V. exposure unit.  At least I found out before I bought them.

Now I am wondering where I am going to put everything when I move out.  There is a lot of stuff including hundreds of big ass prints that collectively weigh a literal ton.  8x10 and 4x5 cameras, encaustic equipment, a big Epson printer and a smaller one, large 40x30 framed prints. . . shit. . . a lot of stuff.

To wit: My days as a studio artist are numbered.  I already miss it.  I think back on all the hours I spent there.  I think about the fun and joy and of the communion with others.  I think about how wonderfully located it is, mere blocks from the most chi-chi bars and restaurants.  It is my second home.  And now, that is over.  It is done.

I am glad I did it.  I am glad that I once had an art studio.  I had something many, many photographers never do.  I had a place to make up things, a place to go.  It was legitimizing, too.

I will go today and start looking to pack it up.  I don't know when I'll be able to make alternative process pictures again.  I don't know what any of this will mean in the end at all.
Posted by cafe selavy at 9:23 AM