Christmas of the Grotesque 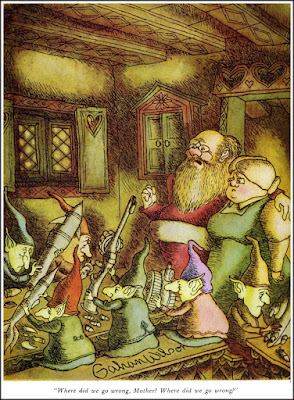 It is the Christmas season--time to thrill the kiddies.  But what about the rest of us.  No worries.  Bill Murray to the rescue.  Maybe.  His Christmas special comes out this week (either tonight or Friday night--I've read conflicting reports) on Netflix.  I was looking forward to that as it is staged in the Carlyle Hotel in NYC, a symbol of something lost and not to be recovered.  But the reviewer for the New York Times has given the show a pretty good lambasting (link).  I hope he is wrong.

Of course he can't be wrong in the Present Era (P.E.).  Even the new Pirelli Calendar is taking heat.  Many are calling it a cultural shift (link) but some are already criticizing it (link).  I have no problem with that, though.  I can hold both ideas at once and not go mad.  I think Sherwood Anderson nailed it a long time ago in the opening chapter of "Winesburg, Ohio."  "The Book of the Grotesque" (link).  There are so many truths, and we pick one or a few of them to hold onto as our truth or truths and are made grotesque by it.  But there is nothing to do about it accept recognize it.  Cultural Truths are the same.

I got into another argument at the Y yesterday with a fellow who seemed "a type" to me, the wealthy contractor who believes "success" has proven he is "right."  One of the weirdest things about the Y is that they have televisions in the dressing room.  I have never understood this.  Do people go to the dressing room to watch their favorite shows?  They are mounted high on the wall, so maybe they are there to keep you from looking at the other fellows' peckers, I don't know.  Could be.  But the conservative motherfuckers at the Y always have the thing tuned to FOX.  So yesterday, they were reporting the terrible shooting incident in San Bernardino and the contractor type begins to opine to the room about how Obama is taking care of this problem at the Climate Summit.  Sometimes I just can't keep my mouth shut.  Ha!  So I asked him what he meant.  He got kind of lost in some conflation of Obama saying that they were going to stop terrorism by reversing climate change.  Don't ask me what he meant.  It was idiotic stuff.  So I said, "huh, he said that?"  The fellow didn't want to talk to me anymore, so I said, "You know the CIA has declared that global warming is the number one terror threat they face."  Oh, boy, that got him started again.  He said that was a lie, and I asked him if he had a phone.  We could Google it!  He said he didn't have a phone, and I was finished dressing, so I told him to look it up when he got home.  He was steaming by then.

I will be kicked out of the Y for good soon enough.  First I piss off the black guy and now the cracker.  I'm quickly running out of friends.  They already look at me like I have shit on my shoes when I walk in. Sometimes I just have to check.

The critic says: “A Very Murray Christmas” corners the market on gloomy. . . . It tries hard — too hard, really — to turn melancholy into a thing, and it winds up being a holiday special for the disillusioned and dejected, full of inside jokes but in the end kind of empty.

I hope that the critic is just not that well attuned to melancholy and emptiness, that he is a shallow grotesque who holds on too dearly to his the truths he has gobbled up--but I have a bad feeling that maybe he is right.  I will watch it and see if I am disappointed.  If so, it won't be the first time this year.  I'll tell you all about it later.  Now it is time for the factory.
Posted by cafe selavy at 7:58 AM