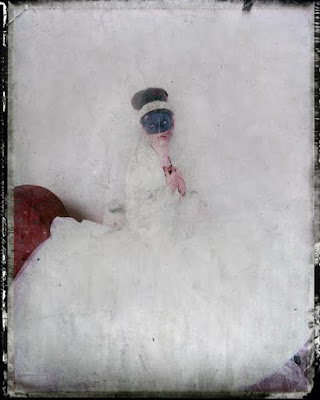 Il est fini.  There is nothing left in the studio but the red couch.  I thought it fitting that it be the last thing out.  Now when I close the door, I hear an echo.  I'm feeling a little bit empty, a little bit blue.  I thought it might be a relief to get it cleaned out, but the sadness has entered.  So much for that.

I was there for exactly six years.  To the day.  Here is one of the first models.  There is the couch.  There is the mask.  She is fifteen and wears her mother's wedding dress.  I shot with her over and over again, and with her fourteen year old sister as well.  Their mother, who had modeled when she was young (she even brought some of the pictures as props), did all the styling and was quite good at it.  We became like family.  The model homeschooled so that she could have time to pursue modeling.  I introduced her to an agency that signed her, but nothing much ever came of it.  She met a boy online who lived in England.  He came to see her and she went to see him and she began to put on weight.  Eventually she moved to England and married him.  The sister continued to model for awhile, but eventually I lost contact with them.  Forever, though, she will remain a figure in an image in a moment when we had one purpose and it was all beautiful fun.

Today, though, I must deal with the mess that is my house, for I have torn up rooms to store my larger prints and very large framed images.  It is crazy.  I don't have room.  There are piles of images everywhere.  What in the world was I thinking?