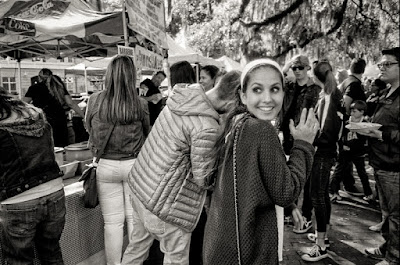 I've been to the home chemistry lab.  Scotch, Benedryl, and coffee.  I hate the fucking cat.  The Benadryl is not for a cold but for allergy.  The cat has taken to sleeping on my part of the couch, the sacred, sacrosanct part, and now I'm a mess.  Last night, I started a sneezing fit that would not end.  Thirty or so violent sneezes that were making me hurt badly.  Benadryl was all I had to ease the stinging and swelling that had closed my throat.  At one point, I thought I couldn't breathe.  More Benadryl and scotch put me to sleep.  Coffee is helping me come back to the world.

The bad end to an otherwise pleasant day.  I don't want to talk about the weather to most of you.  All I can tell you is that you should keep voting for the climate change deniers and the moderates who take a careful approach.  You wouldn't want to rush ahead on a thing like that.  So while I would normally say it is cold here, I will simply say it is pleasantly cool.  Ili and I wanted to do little.  In the afternoon, though, we decided we should shower and go out.  I needed socks.  And so we cleaned up, but we didn't want to go out for socks at all, didn't want a mall, didn't want those people.  Still, we were clean, so we went to pick up my Leica Monochrom which was in the shop for cleaning, then to a camera store to get batteries for another camera.  I had listened to Ili about dressing, so we were not prepared for the weather.  The wind cut through us.

"I want some Scottish eggs," she said, "and an Irish coffee."

That sounded good, so we went to the little Irish pub down the street.  And then it was mid-afternoon.

"That was fun the other day when we went to see the movie."

"Oh, that's playing in half an hour."

"I thought you said 'nothing'?"

It was a film you need to see on a big screen.  The camerawork is startling and Tom Ford deserves awards.  We were happy.

It was almost dark when we got out and twice as cold.  A full moon had just risen, big and yellow and blood red.

Grocery store, health food store, home to make spaghetti.  I wanted to look up resveratrol.  The price has gone up at the store.  Surely I could get it cheaper online.  I read some studies on it while I was online.

"It says here that resveratrol increases your estrogen levels."

"Is that why you are such a whiny little bitch?"

Dinner watching "Jessica Jones."  Don't bother.  It looks good, but the plot and the acting are horrible.  Need to find something else.

Picture at the top is a film frame shot last week.  Fun.  I want to go out in a little bit and do it again.
Posted by cafe selavy at 10:10 AM