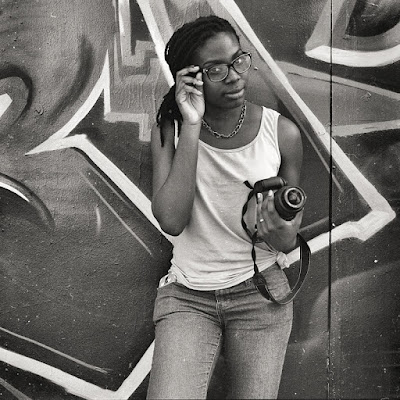 You might remember my story about coming upon a group of people painting the back wall of a building with graffiti.  Here is the girl with the camera.  Dangerous looking character, no?  Ha!  They were all sweet as they could be.  And therein lies the power of the photography. . . to show you what you should have seen.  Photography is transformative.  Nobody ever looks the way I remember them through the viewfinder.  This is just another snapshot, I know, but before you start to judge me, you must remember that this was like the second roll of film I had put through the camera.  Maybe the third.  I haven't exposed more than five rolls yet, I think.  But I have to say that I have fallen in love with the Hasselblad.

Yesterday, my Lecia M7 arrived.  I was nervous to open the package thinking of all the things that might be wrong with it.  But there is nothing wrong with it at all.  It is a beauty.  I don't have a lens for it yet, but I put on the lens from another camera that works, a 40mm Rokkor lens from my little Leica CL camera.  I put in a roll of film and went outside and snapped some pictures to see how the shutter sounded, how the film advanced, etc.  I kept it with me throughout the evening, holding it, rubbing it, getting my juju into it, making it my own.  The camera came from San Francisco, so it is already geographically friendly.  I got it for about 3/4s the going price, a good deal, so I am not feeling the anxiety that I thought I would.  The 35mm Summicron lens gets here Friday.  I am happy.

Tonight is the first full moon of Spring.  It is called the Worm Moon, but I think we should petition to change that.  It should be called the Carnal Moon or something to that effect.  The creeks begin to flow, the sap starts to rise. . . .

I said that to one of the fellows at the factory yesterday, and he looked at me blandly and said, "I don't know what you are quoting."

"I'm not quoting anything."

"That's pretty poetic for you," he said.  "I always thought of you as a kind of gritty guy."

I was set back a bit by that.  I don't see myself that way at all.  A little later, another guy at the factory was telling a story about me coming to the bar to meet a bunch of them.  I walked by the window, looked in, went on, then came back.

"And I said, 'There's C.S.' as you passed, and they said, 'How do you know?' and I said, 'I recognize the way he walks,'" and he did hunched forward and walked sort of like a caveman.  It was not at all flattering.

I am not who I think I am, apparently.  That man in the mirror is not who he thinks he is, I guess.  It is best to be a disembodied eyeball.

You lie in bed in the middle of the night and think about how you are going to change.  There are things about you that you always knew, but suddenly you know them in a more succinct and disparate way.  What once seemed to matter little has come front and center and you realize that the culture has shifted, that values have changed, that people are focussed on emerging aspects of the human condition.  It has always been thus, you think, lying in the discomforting darkness, and will always be.  Nothing lasts and you must embrace the nothingness for that is the only thing that remains in the end.  That is what you think as well as thinking how unfair it seems, but you know that there is no fairness nor unfairness, that it is all just a set of conditions and decisions and judgements that will become nothing in their own time, and you only wish you could stick around and see it all change once again just to know how the new ones will adapt to it, just to watch them in the middle of the night in the discomforting darkness, just to watch all the confidence and certitude wash away, just to see what remains.
Posted by cafe selavy at 9:09 AM