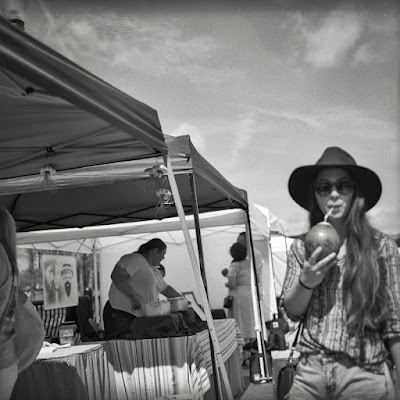 Yesterday was as pretty as the last one and the one before that, but the temperature is creeping up--just enough to remind you that it will be cranky hot soon.  And I was cranky yesterday.  It was Sunday, but it was also another working day.  I got up and put on my working clothes and went out to begin again.  Shovel and hoe and rake and wheelbarrow.  And gloves.  Good leather ones, too, brand new.  My tender hands were more tender than the day before, though, and it wasn't long before the hot spot inside my right thumb had become a blister and an even briefer time before that blister broke.

These are not cowboy hands.

I shoveled dirt in an effort to make room for the deck frame.  But there were thick roots and electrical wires and irrigation pipes and gas lines to unearth.  I wanted to be a good worker, but I needed a foreman badly.  What was I doing?  I loosened the dirt and dug around things and filled the wheelbarrow and moved the dirt to the bed I had dug up for jasmine.  Over and over again.  And soon, I had exhausted my possibilities.  After an hour and a half, I stood looking at my work uncertain if I had done the right thing.  The place was a mess.  I began to feel that sinking feeling.  Anxious despair.

And so I said fuck it.  "Let's go to brunch," I said.  "We'll go downtown."  I invited my friend and hopped into the shower and got clean again.  I looked out over the mess.  I wanted someone to come and fix it.  I didn't want to be a cowboy any more.

Downtown was crowded, and the little restaurant where we were going was packed.  Suddenly, though, there were three seats at the bar.  My friend started to take them but he let another fellow say he had been waiting on them.  He sat down alone in the middle seat.  I watched him for a bit as we put our names in for seating, but that was going to be an impossibly long wait and I was hungry and anxious and getting depressed and angry.  Ili was wandering around somewhere outside and my friend was talking to someone and I felt everything in me tightening.  It had to come out.  I walked up to where the fellow was sitting in the middle seat at the bar.

He was a young guy, and he turned to me with his cool haircut and arrogant way and said, "No, my friend is parking the car."

"What?!!  He's not here????  Fuck that!!!  I'm here," and I took the stool next to him and asked him to move down.  I thought I had three seats and I asked the fellow two seats down if he was getting ready to leave.  He looked at me timidly and said no, his buddy was sitting there.  He had just gone to the bathroom.

I had gotten myself into a silly jam where I was just an angry asshole.  Fortunately, my friend and Ili were ready to give up and try someplace else anyway.  I was glad to get out of the jam, but it left me in an even fouler mood.

We walked to the lake with the big fountain through the Farmer's Market that we often attend.  I'd never seen so many people there before.  It was like a festival, the sun shining, people playing frisbee and hula-hoop, dogs running, people eating and drinking.  And I hadn't brought a single camera.  Ili wanted some sugar cane juice which I drank as well, but it was too much and I was getting more than jittery.  I needed food.

On we walked, into the crowd, and I headed toward the first restaurant I saw.  The sign said "World of Beer."  Surely they had food.  We headed in.  And they did.  We got a table by the lake, me sullen and silent.  I watched the crowd walk by.  It looked like Disney World, not like the cool, hip crowd that we had seen before.

It was awful, truly.  The view was grand, but the place was run by hipster drug addicts with tattoos and nose hoops and sallow skin and mouths that could never smile sincerely.  The waitress hated us for sure.  Ili asked her to wipe the table which seemed to really too much to have asked.

"I don't think she likes you," said my friend.

The food came.  I had breakfast tacos.  The eggs were cold.  Not room temperature but cold like they'd been in a refrigerator.  Everything was as it seemed.

I was glad to get home.  I stripped off my clothes on a perfect day and lay on the bed.  Two hours later I had to get up to market for dinner.  My mother was coming for steaks.  But I never woke up.  I bought the steaks, bought the potatoes, bought the asparagus, but I was still in some bad, bad dream.  I stumbled through dinner preparations and when my mother came over, I opened the wine.  I walked her around to show her all the work I had done.  Then I put on the steaks.  Nothing.  I was out of gas.  I mean literally.  Shit, fuck, piss.  I got into the car and drove to the grocery store.  I had to buy a tank to get the gas.  $55.00.  Twenty minutes later, I had the grill ablaze.  I put on the steaks and came into the house to chat.  In a bit, Ili and I went to look at the steaks.  She told me to move them, that she didn't want hers charred by the flame.  I flipped them and we went back into the house.  Chat chat chat.  I looked out the window to see the entire grill on fire, flames flaring, smoke pouring.

I had ruined the steaks.  And everything else, too.  We ate the salad my mother had brought and some of the vegetables.  Ili made some cheese and crackers.  They went well with the wine.  I ate some of the ruined steak.

It was the end of a rotten day.

I look around this morning at the mess outside.  The house repairman just called and asked me what I had gotten done.  Then he told me the bad news.  He had shingles.  I can see how this is going.  I'll be walking through the torn up dirt for weeks.

I want things to be beautiful again, but this is how it goes.  The humidity rises, the temperature grows, but the pruned back plants refuse to grow.  There is lumber to order and plants to buy, but it is back to the factory for me.  I read today that the rich live fifteen years longer than do the poor.  I know why.  I want to just pay to have all this done.  That is what the rich do, and they don't have to fret about their checkbooks.  It is the fretting and the dealing with seating in the hullabaloo of life that is the killer.  Shit piss fuck.  I really burned those steaks.
Posted by cafe selavy at 9:55 AM