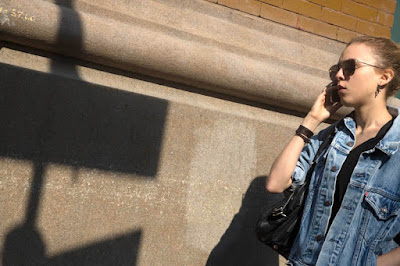 I stayed up late last night after a day of too much drinking.  At the last moment, I decided to buy the pay-per-view UFC fight, Diaz vs. McGregor.  It was a drunken decision, I'm sure.  I wish I hadn't paid the $60.  I hadn't watched a fight in a very long time.  I'm done with watching fights now as I am with watching most sports.  It's the same thing over and over, the thrill of victory, the agony of defeat.  I read that finishing fourth in the Olympics ruins people's lives forever.  There are few true amateur sports left.  Only the ones we make up and play, really.

"O.K.  So we'll put the basket here and you have to stand on one leg facing the other way and throw the ball into the basket without turning around."

Something like that.  I saw a graphic in the N.Y. Times showing the winning times in the men's 100 meter sprint from the first modern Olympics until present.  I would have enjoyed those first Olympics more.  The winning time was twelve seconds.  He was just faster than everyone else.  Now swimmers have water with the exact chemical formula to allow speed.  WTF?  Every condition must be perfect so that people can set new records.  It doesn't interest me.

You know those countries that don't take home a single medal?  I like them best.  Bill Murray said that every event in the Olympics ought to have at least one "normal" human just so we can have an idea of what the other's are accomplishing.  I think they should all be "normal" humans.

I doubt I'll ever pay money to watch another sporting event.  The fight last night really bored me, and I am tired this morning.  They interviewed the fighters after the fight.  Oh. . . that was fascinating and insightful.  Life lessons there.  Sort of like watching back to back to back episodes of Beavis and Butthead.  Only less interesting.

I'm a sourpuss this morning.  I would like to take yesterday back.  I want a do-over.  Oh well.  Lesson learned.
Posted by cafe selavy at 9:18 AM