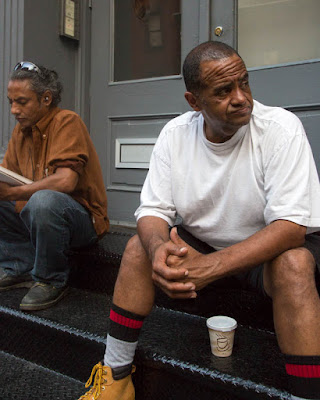 I took my Hasselblad to the Sunday market yesterday.  I had it in a bag and wasn't sure that I would take it out.  Taking pictures so obviously in a crowd isn't easy to do on occasion.  It is the sort of thing you must inure yourself to.  I wasn't alone, which is another piece of the puzzle.  Using a camera is a terribly geekish thing to do, not the sort of activity you want someone watching you perform.  It is also almost impossible to divide your attention between the person you are with and what is going on in the crowd.  And so, I walked around with my camera in the bag trying to photograph things with my eye.  Just as we were leaving, I started pointing out people who would make good photographic matter.  An African-American woman was talking on her phone holding a pineapple in her hand shoulder high as if she were delivering it to a table.

She was pleased to do it.  I opened the viewing hood of the camera and focused and pushed the button, but it wouldn't depress.  Maybe the lock was on.  I tried that.  Nope.  I checked this thing, I checked that.  I was standing in the sun and beginning to sweat profusely with heat and nerves.  I couldn't figure out what was wrong.  I tried to rewind the film forgetting that you don't rewind film in a medium format camera.  I opened the back and exposed the film that was there.  I remembered the picture of the two men holding signs and marching in front of the abortion clinic.  Shit.  I took the back off and when I tried to put it back on, it wouldn't go.  The woman was still talking on her phone holding her pineapple.  I had another back, but I didn't know what was in it.  I put it on the camera and it attached.  I would try this.  Again, though, I couldn't depress the button.  Dripping with sweat, I waved to her and told her my camera was broken.  I went to a bench to sit down and figure out what was wrong.

I figured it out.  It was me.  I hadn't used the camera for so long, I had forgotten almost everything about it.  When I finally had it working, the woman with the phone and the pineapple walked by.  I thought of how good that picture would have been, and I thought of the ones on the film that I had ruined.  A man walked by.

"Did you see his face?  That was a classic."

"Ask him if you can take his picture."

That isn't quite how it works, though.  There is a secret recipe to it, an alchemy.  It is not something easily explained, though there are plenty of articles by people telling you how to photograph in the street.

The man came back and sat on the bench next to ours.  He looked over and said, "Man, this is what I need.  My knees are killing me."

"I know what you mean.  What's wrong with yours?"

"This one is my bad knee.  I hurt it when I was about eighteen.  It swells up sometimes this big."  He held his hands like he was holding a cantaloupe.  "This one, my 'good' knee, is starting to give out, too.  My boss says I got ten good years left in me.  I tell him he's full of shit.  Twenty, I say.  You say ten, I say twenty.  That's the way I am.  Someone tells me I can't do something and I'm going to do it."

"What kind of work do you do?"

"I'm a cabinet maker.  I've been doing that for thirty years.  I'm fifty and he says I've only got ten years left, but I say twenty."

"The good thing is," I said, "your knees will get better with age."  I grinned.

Just then a mom and daughter walked between the benches.  He looked at me with wilder eyes.

He was a rough looking guy, thick upper body, maybe five-ten, a face with miles.

"Look at these shoes."  He held his foot up.  "I came over to see my girlfriend.  Two years. I'm the only sonofabitch out here with dress shoes on.  She's over there, somewhere."  He pointed towards the market crowd.  "She'll find me."

I was looking at him.  He was a little nuts, I think.  I'd grown up around men like him.

"You've done pretty well being a woodworker so long.  You've still got all your fingers."

He held them up for me to see.  People who work with machinery, I know, are proud of that.  He had thick, crooked, working man fingers.

"I've seen some accidents you wouldn't believe," he said.  "I saw a guy cutting molding, big six foot pieces.  That's all he did all day, just cut the molding for the cabinets.  He did it every day, but I guess he wasn't paying attention.  The saw jumped and sent a big piece of wood right through him.  It didn't hit any organs or anything, just pierced him.  He was lucky.  I tell people, 'You can't be afraid of any machine in here.  If you're afraid, your gonna get hurt.'  My boss used to be my landlord.  He's been doing this for five years and thinks he knows more about it than I do.  He'll tell me how to do things.  'Do it this way,' he'll say and I'll tell him, 'I've bee doing this for thirty years, and I'm going to do it this way.  I can do his job and my job and. . . whatever.  I hate that son of a bitch.  Well. . . anyway, he doesn't know shit.  I'm the kind of guy who will tell you 'go fuck yourself,' and you can either walk away or. . . you can do something about it.  I don't care.  I'm not backing down from nothing."

He had worked himself up pretty good by now.  I wondered about his girlfriend.

We stood up to go, and I walked over to say goodbye.  I reached my hand out and said nice to meet you.

I looked at him, but I could feel my friend behind me.  We walked on down the street.

"I thought you were going to ask him to take his picture."

"Because you were there.  I wasn't sure how it would go, and I didn't want it to go south in front of you."