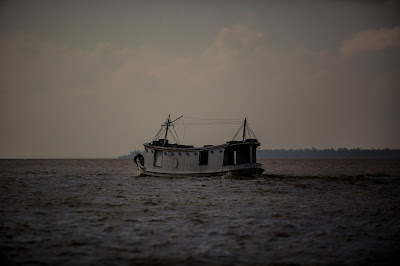 I want to make pictures like this one from an article in the N.Y. Times about pirates in the Amazon.  It is not a photograph so much as an impression. . . a dream.  It is not even a good photograph, really, but it stimulates the old imagination.  Operative word there--old.

Our friend Lisa is back from Africa.  You can read her comment in yesterday's post.  I never got to go.  My Africa is like this picture, impressionistic and imaginative.

The world lends itself less and less to the old reveries.  It takes much post-production to make the old world. . . many revisions.

I am told that is because it never existed.

I'll take that--the old world of imagination.  It is the refuge of rogues and scoundrels.

The new world is full of theory.

The coming world is full of something else.

I can't make the old images any more.  It would violate the conditions of my parole.  One slip up and . . . wham!!!

I went to the beauticians yesterday for holiday preparations.  She is a Russian Jew.  The old world still lives in the Russian immigrants that surround her.  It reeks of vodka and cabbage.  It is told in deep, colorful language.  Still, she is Americanized, as she says, and the old ways are being eradicated.  She is not displeased.  I like the dangerous Russian men that surround her life, though.  They guard something primitivistic and seem straight out of an American movie.

I am off for the rest of the week, so the holidays begin.  I will try to celebrate in the most urbane and dignified of ways.  Restrained and sophisticated.

Yes, yes. . . I'm afraid to slip up in image or word.  I have a reprehensible imagination.
Posted by cafe selavy at 8:47 AM