The thing to do is to buy some very expensive cameras, then take all your pictures with your phone.  It just makes sense.  I had them--the expensive cameras--but the phone does such a beautiful job with mundane things that. . . well. . . it just does.

So, here's what you do after a sad night.  Get up and go to the gym.  Then come home and go to a hideously expensive breakfast on the Boulevard.  Then take a nap.  Then, when you get up, mid-afternoon, the sun will be out and the sky a brilliant blue, and the air will be warm enough to ride on your Vespa.

That is what we did.  The ride to breakfast was only half a cold mile, so Ili put on a bold red and green holiday sweater with dinosaurs wearing Santa hats all over it.  It is a hideous sweater.  But the little boy waiter at the breakfast place thought it was great.  He was going to a bad sweater party, he said, and he was going to wear one a lot like that.  Ha!, I thought.  You see.

After breakfast, I couldn't hold my eyes open.  It was eleven or so, and I thought it luxurious and decadent to go back to bed at such an hour.  My body was buzzing, and I didn't know what it might be.  Too much of something?  A coming illness?  Simply bone-weary fatigue?  The cure was the same no matter which.

By one-thirty, we were back on the road.  And oh, what a road it was.  The light is falling so incredibly this year, the brilliant highlights, the deep shadows.  Everything appears in sharp bas relief.

We were taking something back to a secondhand store for Ili which meant a ride through what is known here as "The Milk District." 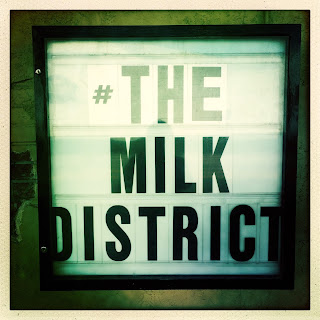 This used to be cattle land run by farmers and ranchers, and one of the old dairy farms and processing factory was right here when I was a kid.  You drove by it on the way to the beach.  Now only the processing part is left.  But the entire area hasn't been gentrified yet, and there are a lot of cheap and funky bars and stores on a little strip of road running alongside. 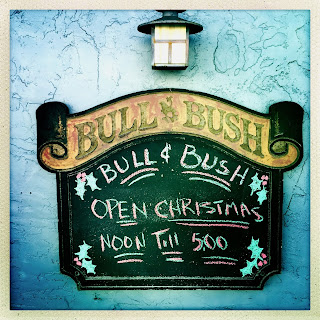 I pulled up on the sidewalk and let Ili off.  I walked around cool like with my very expensive camera, but I didn't use it.  Nope.  I had my coolio phone. 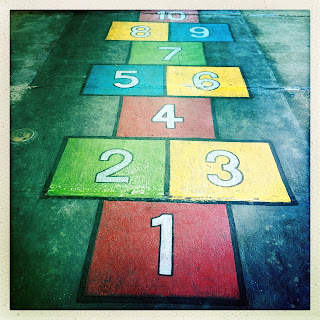 In a bit, Ili came out and said that there was a pair of 18k gold framed Aviators in the store.

She didn't pay much attention.  I was ready to start the scooter up when she said, "You can get them for me for Christmas if you want.  That will make it easy."

The woman in the store told Ili how much she liked her sweater. 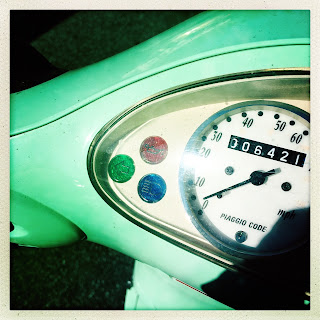 These big, weird, undeveloped open spaces are the sort of landscapes that I see in my dreams.  Weird places like the bridge from San Francisco to Berkeley (but not the reverse) and the bridge from Miami to Miami Beach, those places where you pass the giant cranes that unload the ships.  Eerie.

We rode.  Ili wanted to go through a theme-park-style neighborhood with its perfect rows of houses and townhouses and apartments and its little downtown.  She said it appealed to her OCD sensibilities.  Afterwards, I took her someplace she hadn't been, a neighborhood of giant homes, 10,000-20,000 square feet where lots sell for a million off the lake and three million lakefront.

"Would you want to live here?" I asked.

"Yes," she said without hesitation.  That's what I love about her.  There were no qualifiers, no "buts" involved.  Just a straight out, "Yes."

"My friends wouldn't approve, of course, but so would I."

I make a really bad Bolshevik.

By then it was time for a beer and a game of darts at the Irish pub.  I play darts like I play pool--badly, then spectacularly, then badly again.  Ili says she is not competitive, but she is not happy when I win.  She lit up a bit when she beat me in the final game.

The waitress told her she liked her sweater.

"I need to go to the toy store," she said, and we were off to the Boulevard.

Me, being me, got pissed at a woman sitting in the intersection of the street not going left or right or straight ahead, so after a bit, I passed the traffic and hit my annoying little Vespa horn and maybe said something aloud.  Apparently I did because after we parked and went into the toy store, the owner announced to the employees that if they see the little green Vespa coming, stay out of its way 'cause its got an awfully angry owner.  Ha!  Ili is right, of course.  I have to control myself when I am riding in town.  I will get quite the reputation.

The sales clerk told Ili she liked her sweater.

After toy shopping, we decided on a late afternoon Sazerac at a bar off the park.  Light spilled in through the open doors like diamonds.  The bar was empty except for two women sitting across the corner from us.  They both liked Ili's sweater.

"I hate that sweater," I said to a laughing Ili.  "It's ugly and you get too much attention."

"You just don't like me getting attention," she said.

Driving down the Boulevard back to the house in the last of the afternoon sun, there was a final victory that I took for my own.  As we passed a very beautiful young blonde on the sidewalk, she turned and stared and smiled and gave us a graceful thumbs up and said, "Yes."

"We make this shit look good," I said to Ili in my coolest voice.  Her arms wrapped gently around my waist clenched and gave me a little squeeze.

"But I still hate that sweater."