Holy shit!  When I posted the other day that I would take to the streets with an X-Ray camera, I didn't know it was possible.  Life is just too weird.  Some guy made one.  Take a look at this (link). 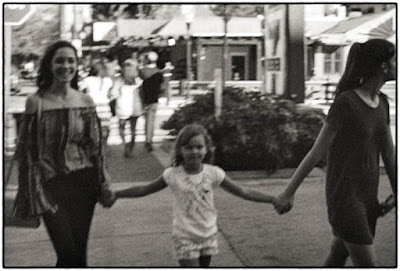 Here is a picture I almost took the other day.  I mean, I badly missed focus.  WTF is wrong with me?  I am taking more out of focus pictures than focussed ones.  I am failing at the very thing I want to do.

I screwed the picture up in processing anyway.  I used the R5 monobath to develop it.  The images all came out muddy.  The big surprise under inspection, however, was that they were reticulated as well.  Reticulated?  You can look it up if you are interested.  But the film is developed in a warm bath, so I suspect that the water I rinsed it in was too cold and it caused cracking of the film emulsion.  I am going to have to go back to the old tried and true ways which take a lot longer.  But that is the way of things, no?

I went to a factory party last night.  On the way, my car lost power.  It just quit on me.  I was trying to steer it to the side of the six-lane road when the power returned.  Then the dashboard lit up like a spaceship.  There were all sorts of messages that I didn't understand--except one.

I think that is what it said.  I'm pissed.  I spent $7,000 on repairs no more than six months ago.  Now this.  I hate spending money on automobiles.  I hate thinking about them.  But I should get used to it.  This is the way that Trumpland will be, I'm sure, just a series of expensive profit making deals for corrupt manufacturers.

It's the New American Way.

The factory party was at the home of one of the bosses.  It was for the other minor bosses.  There was that, and then tonight I must go to a birthday party for some of the workers (we celebrate monthly birthdays).  But I, as I have told you many times, am not all that social.  Yesterday I found out why (link).  It is something I've known all along.

And so I am grumpy this morning.  Very.  The biggest luxury is time and mine is being taken.  I think I'll ask Santa for that this year.  Oh, Santa baby. . . .
Posted by cafe selavy at 9:28 AM