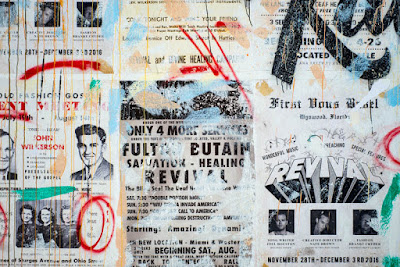 I love walls full of old posters.  They are often beautiful things.  This was a piece of wall in Wynwood, a few blocks from our Miami condo.  I thought to write about Wynwood today, but first I must break away to tell you about yesterday.  That is the trouble with daily blog posts, of course.  You can plan to tell a tale over several postings, but life goes on, events happen, and so narratives get interrupted.  It is much like living.

So. . . two things.  First, my Leica.  When I was in Miami, I began to hate it, first because it is a pain in the ass to focus manually, and second, because most of my exposures were off.  I was afraid something was wrong with the meter.  I had been sold, I feared, a defective new camera.  I considered sending it back to the seller which would have been a pain in the ass negotiation.  While in Miami, I went to the Leica store and held the new M10.  I asked about trade ins, and I was told, "Sure, we always welcome trade ins."  But when I got home, I wrote to ask how much I would be allowed and was told 80% of market value.  They gave me a quote.  It was not enough.  Thus, I was gloomy.

I decided to take the camera out yesterday and do some experimenting to see what exactly was going wrong.  Again, over half my exposures were off.  I thought that the meter was locking on the previous shot and would not read again until another photo had been taken, so I put the camera setting to take multiple photos at a time.  I'd point the camera at a subject and push the button and let the camera take three rapid pics.  And sure enough, the exposures changed with each shot.  WTF?  Then I had an idea.  I went to the menu and pulled up the exposure settings.  It was set to make over and under exposures which is useful for someone shooting on a tripod who wanted to do HDR processing with the appropriate software.  So I changed the setting.

Voila!  The camera performs like a champ now.  I was light as a feather.  I decided I didn't need the new M10 after all.  Manual focus is still a pain in the ass whether it is with the M262 or the M10.  Nope, I am happy.

So I came back to the factory parking lot after playing with my camera and pulled into a spot.  I put the car in Park and reached for my bag and camera before getting out. When I took my foot off the break, though, the car rolled forward.  "Weird," I thought, but nothing more.

When I came out at the day's end, the car would not start.  Surely it wasn't the battery.  I just got a new one a few months ago.  My secretary had walked out of the building with me and asked me if I needed a jump.

I opened the hood and looked at the engine.  I looked at her and then back again.  I jiggled some wires and hit the starter with my fist.

"That should do it," I said with a wry grin.

She didn't want to leave, but there was no point in staying.  I called Ili to see if she could pick me up, then I called AAA.

Then I sat.  I had paid $7,000 on repairs in August.  They replaced the cooling system and the transmission.  I thought about it for a moment then decided to try something.  I got out and started pushing the car backwards up the little incline.  My idea was that the car had not gone into park and that is why it would not turn over.  Perhaps if I pushed it, the gears would engage.  And so I pushed the monster.  It barely moved, so I pushed harder, then harder.  I got it to roll backwards about seven inches but there was no clicking of the gears.  As I stood there holding the car in place, a woman came up.

"Are you trying to move your car or are you just exercising?"

Funny.  I asked her if she would mind getting in my car and putting on the brake.  She thought I meant the emergency brake which I had not thought of, and she asked me where it was.  I didn't know.  It was where it should be, though, and she engaged it.  I got into the car and tried the key.  Nothing.  I let it roll ahead and tried again.  Nothing.  When I tried to shift the gears, I could feel that nothing was happening.  The gear shift handle just felt free.

Now, I thought, at least I have an idea of what is wrong.

My phone rang.  It was the tow truck guy.  He wanted to know how to get to me.  He was at the factory, but there are many roads to many parking lots.

"I'm on the west side of the factory," I told him.

"Which exit do I take at the roundabout?" he asked.  I hadn't a clue.

"Just drive toward the sun," I said.

"Drive toward the sun?"

"Yea.  The sun is in the west.  Just follow the road toward the sun."

He laughed and said O.K.

When he found the lot, he got out of the truck and got to work without saying much.  He was a big hispanic kid with a loopy smile.  He got under the car and began hooking up chains that were connected to the winch that would pull my car onto the flatbed.  When he finished, he came over and offered me his hand.  Greasy.  Dirty.

I shook his hand.

"Listen, the car is not in gear.  It won't go into park, so you will need to secure it some way."

"Do you want me to put it in gear?" he asked, grinning.

"If I can get it into gear, do you want to just drive it to the dealer?"

He got under the car and I heard a clunk.

The car started right up.  I was hoping everything was fixed.  Then I heard another clunk, and he rolled out from under the car and stood in the window.

"Go ahead and back it up," he grinned some more.

I did. Then I tried to put it into drive.  The gear shift still moved freely without engaging anything.

"Wait a minute," he said.  Then he rolled back under the car.  More clunking.

I hadn't signed anything.  He never asked to see my AAA card.  Nothing.  Now I was just waving and driving away with a car that was stuck in drive and that would not go into any other gear.  How many people would do that, I wondered?  Most people would have said, "Just tow it in," but not me.  I was an adventurer.  Ha!  That's just the way I roll, I thought.

The whole thing had put me into a better mood.  I don't know why.  I just felt like. . . something.

I'll hear the damage this morning.  They will say it is not their fault, that this is another problem, that the linkage went bad, that it was inevitable, sorry, but. . . .

All I can do is be happy I decided not to buy the other camera.  There is that, and there is the other thing, the fact that I am an adventurer and a hero.  I have to believe that or I will despair.

Nope.  I'm a fucking hero.  And maybe tomorrow I will have a better story.
Posted by cafe selavy at 8:30 AM