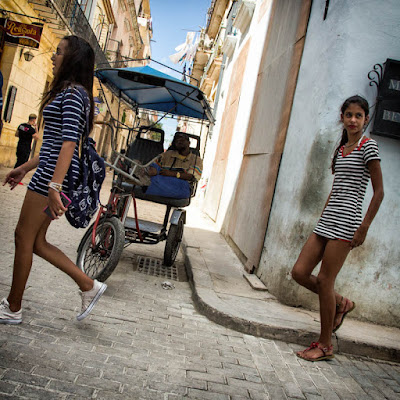 I can't seem to escape Trump news, air quotes and all.  The Brown Shirts are cheering him on in Michigan and Tennessee.  I watched his rally last night and couldn't take my eyes off a crazy boy just off Trump's left shoulder.  He was clapping and shaking his head "yes" to every utterance.  But there was something wrong with him.  I can't say what, but there was something wrong.  If you get a chance to see any of it, you will see him and you will see what I mean.  There is a look in his eye that scares the shit out of me.

They will be goose stepping through the streets soon.  We must wait two years, minimum.  But if the dems keep putting on the Rachel Maddow Show, they are going to lose again.  When it comes to crazy, the right will always win.

I don't hold out much hope.

I don't think these are Cuban girls in the posted picture.  They may be Latin tourists.  I saw a lot of wealthy South and Central Americans in Cuba.  I may be wrong.  Just guessing.  If they aren't Cuban, I think it sort of delegitimizes my picture.  But I only thought of all this as I posted it.  I'll have to think about it more.