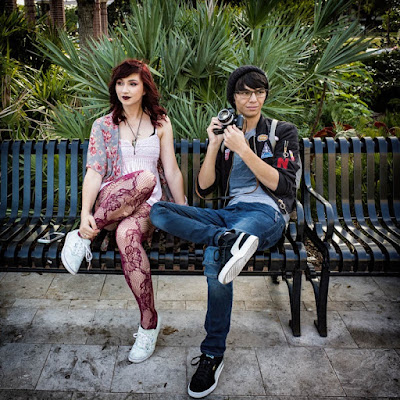 This is another of Ili's photos.  We were riding down the Boulevard on the scooter, and she said she saw a photo I should take.  I wasn't interested, but she told me to turn around.  So I stopped the little scooter and let her go.  It turned out to be a kid who we saw taking our picture on the street while we were riding the Vespa at Christmas time.  Later, while we were sitting with friends at a sidewalk table, he strolled by.  We talked a bit.  He showed me his camera, one I wasn't familiar with.  I showered him my Leicas.  He was enamored, of course.  So when Ili went back, she recognized him. She said he wanted to know if I remembered him.  Sure, kid.  I'm envious.  Here he is being all cool with a young woman.  She's playing dress up and he gets to be a photographer.  What could be more fun?

Oh. . . I did the post processing on the pic.  Teamwork.  I drive the scooter and do the computer work.  This is how it goes.

I'm headed out of town for the rest of the week tomorrow.  There will be a bit of dead air here for the next few days.  Maybe I'll have tales when I return.  Maybe I won't.  Perhaps I'll have a bunch of Ili's photographs to show.  I am beat to death right now and think I may not leave the hotel room much.  Just to get away and not have to do anything is appealing.  I will be in a good town, but the weather is supposed to be shitty.  I don't even care.  I'll make the next few days as easy as possible on myself.