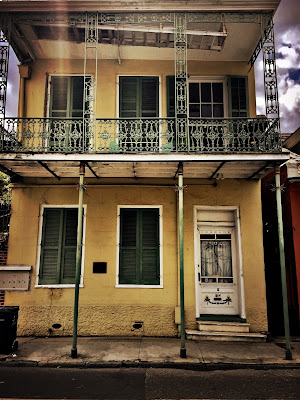 Phone picture (again) of Tennessee William's New Orleans house on the border between the French Quarter and Treme.  It is a rundown looking place now, but maybe it always was.  I don't know if it was touched by flooding.  But this is what the south does to all things, believe me.  I know.  That is a Trump go-to, as is his place in Palm Beach.  But don't believe that the south is like Mar-a-Lago.  It takes a Trumpian effort to keep things in shape.  The deep south wants to take things back into the jungle.  There is a heat that is exotic, of course, and there is one that is wet and wants to turn everything to mold.  There are weeds and bugs beyond your imagination.  Anything can go wrong, and it will.  If life in the north is a struggle to stay warm, life in the south is a struggle against rot.  It is not a matter of letting things go.  It is a simple matter of not being able to keep up.  You need plantation workers and servants to make a shiny, glittery south.  Look at Disney.  Tens of thousands of wage slaves are required to keep it going, to make it sparkle.  It takes magic chemicals to keep the mosquitos and bugs from driving the customers mad.  But if you don't have a plantation or plantation money. . . . Go to New Orleans and have a look.  Then come further south.  Go to Miami and snoop around the projects in the summer.  Do.  I dare you.

It is April and it is 95 degrees.  My air conditioner cannot keep up.  There has not been rain and the trees and shrubs and grass are dying.  Other things come to take their places.  They are unbelievably gorgeous if you like such things.  I grew up here and remember the place when there was still wilderness.  You did not go into that wilderness as much as look at it.  It was not pretty in the classical sense.  It was a marvel, but it was not pretty.  It was something else.

For all our efforts, the jungle wants to reclaim its territory.  The weeds, the bugs, the rot. . . .

The drought will try, then the severe rains and hurricanes, too.  The mold, the mildew, the rot.  Tennessee Williams wrote the way he did because he was from the south.  Southern beauty and charm takes tremendous and unrelenting effort.  Southerners love a new thing with its suppleness and unmarked loveliness more than most because they know how brief that beauty lasts and the effort it will take to retain some remnant of that.

I met Tennessee twice.  I mean, we conversed.  I was young.  He had just published his memoir, and then a couple years after.  When I met him, I knew who he was, of course, but I did not know how great his works truly were.

The works remain.  But standing before his old home, one can only wonder. 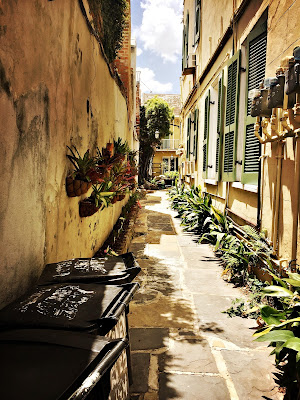