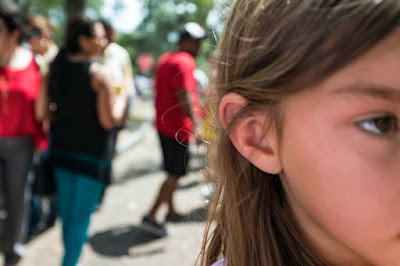 I forgot to look at the full moon last night.  I was exhausted.  I remembered it in bed when I woke in the night, so when I got up at six, I went out on the deck to take a look.  It was still dark, the moon in the other part of the sky, backwards, shining.

I am not a believer in things, but I once had an argument with a professor I knew who adamantly taught the logical fallacies of the Bible in his literature classes.  I had another friend who was also a professor who took frequent trips to Mexico.  She believed in spirits.  The two of them argued in front of me one day, so I thought I'd weigh in.

I didn't believe in spirits per se, I said, but I believed people can spiritualize a place.  It is about perception.  For instance, I said, when someone's father dies and they put him into the ground and a big blast of wind blows the leaves of the trees on an otherwise still day, they say that it was their father's spirit flying away.  They wouldn't have remarked the breeze otherwise, but at that time and psychological state. . . . .

Neither of them agreed with me, of course, and they stayed their individual courses.

Standing on the deck in the dark under the morning's full moon, I noticed things.  Maybe just remembering.  I am haunted by a little cat now in not so mysterious ways.