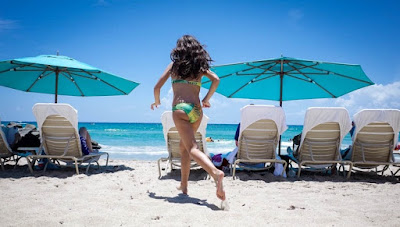 Another summer weekend approaches.  Beaches and pools and cold springs.  I'll give it a go, as they say, and see what happens.  I should be happy.  There is little to complain about other than my lack of creativity.  To make up for it, I have put in a bid for a camera on eBay.  It is a lowball bid and I am sure to lose, but it made me feel good to be in the game.  It is a swell camera, one that I used to own before the thievery, and if I do end up buying it, I swear to sell one of my other less used cameras to pay for it.  Just saying that makes me feel much better.  Now I hope I win.

We should look forward to things as much as this little girl looks forward to the sea.  The sand is hot, the water refreshing.  "The Life You've Earned," the advertisement says.  Maybe that is what I have.  Probably so.

"What did I do to deserve this fate?"

I must look back over the years of writing, but I think I am never good in the summer.  The heat oppresses me, and I want to be a Kennedy sailing off the shores of Kennebunkport, later retiring to the broad porches of the large home with a cool vodka and tonic.  Lobster dinners followed by homemade ice cream.  That's the life for me.