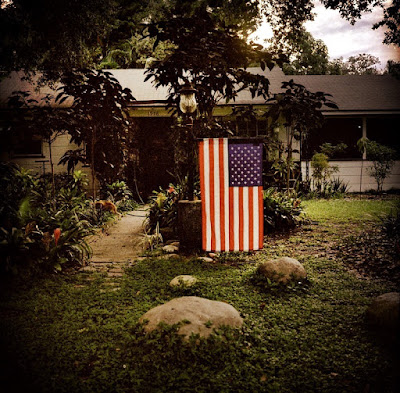 I saw the face of the Four Horsemen form in the clouds over the golf course yesterday as I drove my little Vespa around my own hometown for the last time before the rains.  On the Boulevard, the stores had boarded up their windows.  The bars and restaurants were open, but the only people about were under twenty-five.  There were some genteel retirees getting in one last game of golf before the storm.  Ili spotted Carrot Head teeing off, so I hit the shrill little Vespa horn on his backswing.  You could see his weirdly muscled body tighten up just before he shanked it.  He, I thought, is an arbiter of the apocalypse.  Things were getting very eerie.  That is when I saw the Four Horsemen.

The storm's projected path is the worst one for me.  I am now on the biggest,  most powerful side of the storm.  It is the worst path for the west coast of the state.  There will be massive damage due to flooding.  Across the state, trees will come down.  God knows how long some of us will lose power.  What makes it all worse is that some people will barely be affected.  One neighborhood will suffer.  Another street or two removed, the power will never go out.  One house will have bad damage.  All around, others will be fine.  Suffering is very particular.  I've gone through it before, and I know that others do not want to dwell upon your misery.  They will feel bad for a microsecond or two, and I mean those who know you, but they want to turn their attention to something better as soon as possible.  I know, for I am like that too even though I've been on the wrong end.  I spent more than my life savings and a year and a half of miserable labor recovering from Hurricane Charlie, and I still want to turn away from the suffering of others when I can.  I have more empathy, but what can you do?  College Football Saturday and NFL Sunday will still be more important to almost all Americans.  Before the games, they will pay some sort of tribute to all those who have lost their homes and loved ones, especially in Houston, and then. . . "Let's play ball!". . . and the crowd goes wild.

But of course, that is why we invented sports.  They are supposed to be a respite from personal suffering.

We have been awaiting this storm for a week now.  People are already exhausted.  I still have another day and a half of waiting.  Everything is closed now, the airports, the grocery stores, the amusement parks--everything.  I have run out of emotional steam.  There is nothing to do but to sit and wait.

This is probably my last post for awhile.  Maybe one tomorrow.  I don't know.  Hurricanes and earthquakes and nukes.