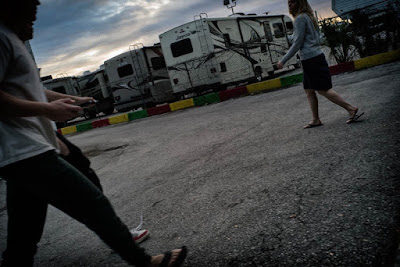 O.K.  I'll try to write what I was going to write if I can.  There is a time lag here that must be considered.  Passive voice.  Consider it.

After a night in the ER and a week of antibiotics, I went for a follow up with a GI doc.  The antibiotics were gone, and I still had pain.  Best to get looked at now, I thought, and not wait.  I didn't want to go, but there comes a time.

He looked at all the records from the hospital online, looked at the blood test and the urinalysis and then the CT scan.  His brow furrowed, his mouth twisted, then he said, "You don't have diverticulitis."  He was more talking to himself than to me, I thought.  "Why'd they tell you that?"

My minde raced.  If it wasn't diverticulitis, then. . . something horrible or mysterious.

"Why did they give you antibiotics?  You didn't need them."  He shook his head.

He asked me to lie back on the examination table.  He pushed around my abdomen asking me if this hurt, if that hurt.  I wasn't sure what he meant by "hurt."

He reached up under my ribs.

"Your liver is normal.  Your spleen is normal."  He thumped his fingers around on top of his hand that lay on my abdomen.  "You have a little gas, but. . . ."

He had me sit up.

"Then why did I go to the emergency room?" I asked.

"You may have had something, but it wasn't diverticulitis.  It is nothing," and here I cannot recall the word.  Organic?  Systemic?  What he was saying was that there was nothing wrong with my organs.  He used some of the medical metaphors that meant I had some inflammation, "itis" words.

Whatever it was, it wasn't anything that gave him much cause.   I didn't have cancer.

I drove home in a fog.  Why did I have pain?  I wanted to give the ER doc a good thumping.

I drove to the gym after work.  I hadn't been for two weeks, but when I got there, I changed my mind.  I wasn't healthy enough for it to be good for me yet.  I wanted to go home and see what was left.  Ili had taken her things back to her place that morning.  I left before she did.  What would be left?  What wouldn't?

I opened the door.  Things were much as I had left them, the kitchen a little barer.  On the dining room table lay a book she had bought me in New Mexico.  On top lay a blank Polaroid.  Perfect.  She had written a farewell note on it.  She had inscribed the book.

Sitting in a cafe drinking the first beer in ten days, a 10% ale.  I look to see if I will get sick as the warning on the antibiotics say, suddenly and violently.

I will go home in a minute.  The house will be the same but emptier. I will cook something easy.  I will have another beer, maybe, and watch t.v.  In the morning, I think, I will go to the gym.
Posted by cafe selavy at 10:07 AM