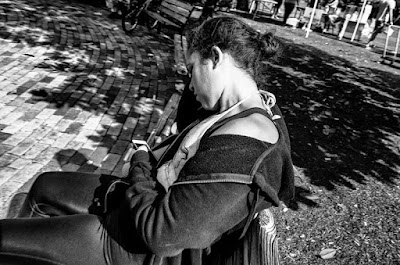 Ten days away from the factory comes to crashing halt.  Ten days of quiet solitude, bad weather, and fighting with demons.  Except for Thanksgiving, I saw no one.  I did little.  I slept poorly.

I am almost looking forward to work. . . but not very much.

My mother came to dinner last night.  She left early.  She doesn't enjoy coming to dinner as much as she did before, I know, now that it is only her and her gloomy son.  I try, but I am sure there is something genetically wrong with me.  She should own up to some responsibility.  If it isn't that, surely it was the way I was raised.  That is on her, too.

But I was a sweet boy, shy and quiet, so maybe something happened to me in the after years.  There is surely something I can point to.  More than likely, it is the criminal side of my father's family.  They were a lively, twisted lot.  It is probably that.  They were much more fascinating than my mother's side.  Outlaws one and all.

I did manage to get out yesterday.  It was a perfect day, and by noon, I was finished putzing and moping, so I put together a bag of cameras, climbed on the scooter, and. . . headed to the Cafe Strange for a mimosa.  The ten days off have had one definite effect on me--day drinking.  I am sure if I had just a few more hermetic days off, I would start every morning with a Bloody Mary.  I have to say it sounds like a tempting idea today.  But there lies the slippery slope.  I'd have to keep a bottle of vodka hidden away in my desk drawer, and soon enough, I'd start speaking sloppy truth to power.

No, temperance is my only salvation.  No drinking until sunset.  This week, I may not drink at all.  Without eating, I put on weight this week.  The empty bottles tell the tale.

Anyway (as my mother says), one mimosa on a perfect day in a cafe full of the alt.left put in me in fine order.  I was off.

Didn't take a picture one.

But I did come home and set up to develop the 4x5 film I had shot the day before.  I had to mix chemicals, measure things, all the while the time for mother was closing in.  I was using a new developer that I had never used before, and I didn't want to chance ruining the shots that I knew I would most like, so I put in two "nothing" shots and some mystery film from film holders I don't remember shooting.  A long while later, I pulled the film from the wash.  Trepidation and all that.  I expected failure.  But no--success!  At least partial.  The two "nothing" negatives looked good.  The other two were apparently color film I'd loaded in the wrong holders.  Selavy.  I have my practice down now.

Meanwhile, I have been scanning old negatives.  I'm running from room to room working like a one man band.  My house is littered with photographic paraphernalia and artifacts.  I have ideas for mucking up the pictures, and the dining room table may become a workbench.  It is dreadful, really, but it keeps me busy.

It is, you know, better than thinking.
Posted by cafe selavy at 8:04 AM