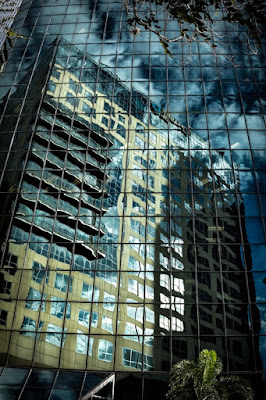 After a stuttering start yesterday, after the gym and a shower and breakfast at the diner, and after an attempt to nap (the yardman showed up just as I fell asleep), after sitting around in a funk, I began to do what I had intended to do all week.  I went into the study/photography junk room, and began to. . . fiddle around, I guess.  There was a package on my doorstep, when I looked outside.  It was from Brooklyn Cameras.  I sent a broken SX-70 camera for them to repair, and now it was done.  I needed some film to load into the camera, and I thought I had some in the study, but I was wrong.  All I had was the New Polaroid film for the Spectra camera, so I headed to the garage to find some of the old Impossible stock.  I brought it back inside, put it in the camera and took the first picture.  It didn't sound right.  It was then I noticed the film was for 600 series cameras.  Shit, I hoped I hadn't broken it again right off the bat.  I ran back to the garage and found an old box of Time Zero film.  I knew it would be shot all to hell, but I wanted to make sure the camera still worked, so I took out the 600 film and put in the other and took a picture of my kitchen faucet.  It worked.  I quickly ran to the computer to find out what happens if you use 600 film in and SX-70.  Nothing bad.  It is only that the film is faster than the SX-70 camera is set up to shoot.  You have to have a neutral density filter to put on the lens . I remembered I had one.  I could tell you right where it sat in the studio.  Where it is now, however, I have no idea.

I was right, of course.  The film was streaked, greens and blues only.  Oh, well.  I ordered some of the new SX-70 film online.  It will be here Monday.

I took out that pack and put in another to see if it would work.  Pushed the button.  The film came out ever so slowly.  I took another.  Same thing.  It worked, just not like a champ.  The old camera could be going.  Too bad, too, for I love the Spectra.

I have three more broken SX-70s.  I'm going to send one of them in to have it converted to shoot the 600 film without a filter.  Why?  Will I be shooting this very expensive film that much?  Probably not.

And there you have it.

I started putzing around in the study trying to find places to put the cameras and the film.  In the process, I pulled down folders full of old negatives and proof sheets and slides.  I powered up the light table and started looking through.  Jesus, what a lot of stuff.  I decided to start purging.  I started with slides.  I began taking out the ones that were "bleh" which turned out to be about half of them.  I went through folder after folder, then discarded the unwanted slides into the garbage.  Then I decided to do the same with negatives.  If there was anything I wanted on the strip of six, I would keep it.  You'd be surprised how many negative strips I pitched.  Just writing it gives me the heebee jeebees, but I think it was the right thing to do.

Then I looked out the window, and it was dark.  The day was done, or at least the light part of it.  The room looked almost exactly as it did when I began.  I did, however, find many images that have never been scanned, so I have made a lot of work for myself that I didn't have before.

I decided to wait until the next day to try straightening things up.  There is little that can't be done tomorrow.

After an unsuccessful trip to Trader Joe's (they didn't have the frozen packages of mussels OR clams), I came home and made a quick meal of tuna mixed into pan fried Asian vegetable rice (as good as it sounds), and turned on the t.v.  I have begun watching "Downton Abbey" a few years late, I guess, but it suits my mental and spiritual state right now.  Oh those Brits.  They sure know how to make shows like this.  I've only watched the first three episodes, but I'm in.  The lighting, the subdued colors, the framing, the rich sets, and the old fashion plot twists built around age-old conflicts has grabbed me.  I know the appeal of the show is, of course, the old-time values, the set hierarchies, knowing ones position and duties, etc.  There is an unshakable sense of community in it all that gives comfort no matter with whom you identify.  The servants lived as monks, really, a not unenviable life.  "What?!?" you say.  "Are you kidding?"  Oh, no, not really.  I mean in the show.  In reality, people are as miserable as they are no matter what.  But living among stereotypes and set pieces for an hour at a time is enjoyable.  See how wonderful the past was?  Ah, the good old solid past.

Why did the postmodernists have to fuck with it so?  We all knew it wasn't true.  Why'd you have to go and prove it?  I know their secrets and tricks, though, and their version is no truer nor more valid than the other.  I am good about holding opposing ideas in my head at the same time and not going mad, though.  Right?

And so, my mind full of bucolic old England and scotch, I made my way to bed.

And woke too soon.  Many hours too soon.  This morning is foggy.  The days are damp and cool now so that it gets to your bones.  I've been in cold weather everywhere, skiing and hiking and climbing glaciated mountain peaks.  I've woken up on mornings when the tent zipper was frozen so that you couldn't get out of the tent.  But there is nothing colder than this damp cold.  Everyone who experiences it, no matter where they come from, says so.  There is no getting warm.  Now that I've had a pot of coffee, I think I'll go back to bed.  Or maybe I should go to the gym and get my day started.  I have only begun to clean up in the office.  Not even.

C.C. texted me that there was a carnival setting up near his house.  He knew I would want to photograph it.  I plan on going today to see, but saying so puts the dread in me.  So many things could go wrong.  That is how I feel right now.  Anything could go terribly and dreadfully (remember, I've been watching "Downton Abbey") wrong.  But one must be a trooper, eh?  One must soldier on against the odds, if one must, and do one's duty to the best of his abilities.  That's the old code, right?  Stiff upper lip and all that?

I'll give it a go.  You can hear me whine about it tomorrow.
Posted by cafe selavy at 8:15 AM