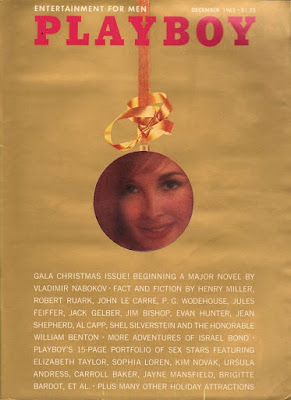 I was in one of those funky shops that sells vintage things the other day.  A Vintage Store, I guess, rather than an Antique Shop.  Vintage isn't as old, I think.  The wares have not yet passed into the realm of antiquity.  It is just stuff that takes you back to your childhood or to your parent's lives, pretty much.  I'll have to check with L.N., though, before I can say this with authority.

Anyway. . . they had old Playboy magazines scattered about as decoration, giving the clothing and furniture another bit of authenticity.  Cool.  I found a bin with about twenty or so old copies and decided to look for some December issues to give my home some of the decorations of the season.  I found two--1965 and 1970.  I felt a bit of unease when I went to the counter to pay, of course, as a young hipster girl was working the counter, and I was certain that she would judge ill of me.  Just taking the magazines up to her felt like an act of sexual harassment.  I decided to pay cash.  I didn't want her to have any record of me for future complaints.  I was being silly, though.  She was excited to take my money, but then I thought that wasn't a deal maker.  I mean. . . it is so often about the money, isn't it?

I looked at the list of writers who were published in each edition, and it was pretty impressive.  I grew up READING Playboy, but really, now I was most interested in looking at the cartoons.  I've read a lot of great things between my adolescence and now, but I really haven't paid that much attention to cartoons.

When I opened the first one up, though, I got sucked into looking at the advertisements.  What I took to be sophisticated when I was a kid turned out to be just advertising schlock.  One ad in particular, though, stopped me in my proverbial tracks.  This: 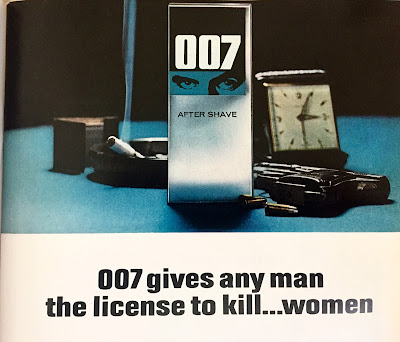 I got my phone and took a picture and sent it to my friends.  How much unpacking of this would a dedicated reading require?

That night, Ili out of town, I sat down to watch t.v.  I couldn't watch anything we watch together, of course, so I searched for something that she would not mind missing.  I chose "American Playboy," on Amazon.  It is a series about the Hugh Hefner and the history of Playboy magazine.  It is a piece of propaganda in that it has to have the blessing of the Playboy Foundation or whoever controls the magazine's interest as it has tons of vintage pictures and footage from early on.  I watched several episodes that night and several more the next.  And it is pretty true that Playboy was a liberal magazine promoting many liberal social causes, most obviously the Civil Rights Movement.  There it was an important force.

For women. . . ?  The series tries to sell the idea of women in the company, but it was by and large (mostly large) a male dominated enterprise.  It was a company of men making money selling male fantasies.  The series makes no bones about that.  Women's Rights?  Well, they promoted birth control and abortion rights and the right of women to take as many lovers as they liked.  But even the contemporary show couldn't mitigate the magazine's essence.  Women were objects of desire.

And therein lies the rub.

The magazine was selling 1.5 million copies a month.  It was hugely influential.  It paid more than any other magazine in the world for fiction, for interviews, for everything.  Playboy was an American trope trading on the one true thing.  Men desired women.

And what Playboy sold was The Art of Seduction.

You could buy a cologne, say 007, and become to some extent a playboy.  Any man with a little money could get A License to Kill.

Playboy really is, perhaps, the best lens into the recent past that you could ask for.  It is an encyclopedia of tropes and behaviors for the Second American Revolution.  I don't know that you can find a better source.

Oh. . . what I was really looking for at the Vintage Shop was a typewriter.  I found one, a Smith and Cornoa Corsair Deluxe, but after researching it, I decided not to buy it.  I've decided to hold out for a Hermes Rocket, made in Switzerland, which by all accounts is one of the best manual typewriters ever made.  I'll have to pay three times the amount of the Corsair Deluxe, but I need THE BEST manual typewriter if I am to produce my masterpieces.  Ha!

Oh, maybe L.N. can find me one at a good price?

I need to start my day now as there are only three shopping days left.  I wonder what else I can find to buy myself?  I'd need to hurry.  Christmas Day is awfully near.
Posted by cafe selavy at 9:54 AM