We Could Not See the Super Moon 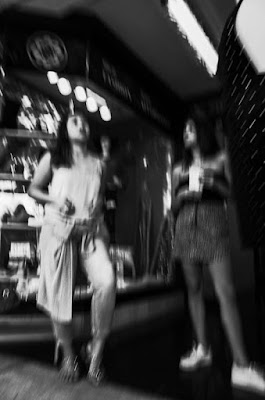 Whoa is me.  I return to the factory today after having a totally dysfunctional holiday break.  Not dysfunctional, actually, but there was little of the usual spirit of the season and there was the struggling with illness that left us all pretty enervated.  Ili has come down with it worst, but we have all been lackadaisical for days on end.  All. . . including my mother who stayed over for New Year's Eve and Day for endless mimosas and beans and rice and collard greens and spicy eggs and bacon and then again with the pork and beans and rice and collards.  Sure, you might say it was the drinking that did it, but we only drank to ease the miseries as they say.

But now, I will have to be that other fellow again, the responsible one who puts on clothing rather than pajamas, who gets in the car and battles traffic in order to get to an office in time so that he can do other people's bidding.  That fellow.  The one who didn't get his batteries fully charged during his time off.

I watched the latest and last of the Dave Chappelle specials on Netflix last night.  Steroid Dave who has smoked too much pot.  He lumbers now where he used to dance, stopping to laugh now at his own "jokes," flexing his muscles visibly.  Maybe it is simply a matter of age, time and circumstance, the inevitable slowing down of any athlete, speed and reflexes relaxing, the mind more puzzling.

But he is still right about most things.  People are too brittle, he says.  Someone is going to take offense at anything you say.  You cannot escape the accusations.  Everyone's a victim.  It is hard to be funny anymore.

“What is moral order today? Not so much the reign of right-thinking people as that of right-suffering, the cult of everyday despair,” Bruckner continued. “I suffer, therefore I am worthy. … Suffering is analogous to baptism, a dubbing that inducts us into the order of a higher humanity, hoisting us above our peers” (link).

Sometimes, it seems, you are on everybody else's side but nobody is on yours.

Shit.  I have gotten used to living in "no time," but now time has returned.  If I am going to the gym today, I have to go now.  This is the reality that kills me.  I'm not ready yet.  Another half hour, that's all I'm asking.  The New York Times says that I should go to the gym and eat vegetables and drink more water and meditate and be kind to myself this year.  Oh, and sleep more, too, perhaps going to a clinic to get treated for my apnea.  Why should the factory bosses have more say than an authority as big as The New York Times?

O.K.  I'll leave with this.  I channeled Lillian Bassman for this photograph.  Look her up.  This is the blurry end of a fallen vacation, the dizzying end to cafe life and fun. 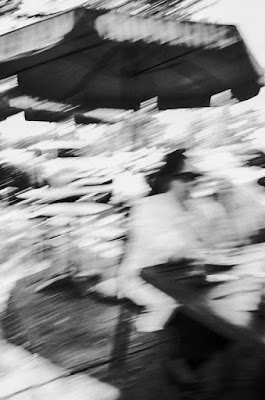