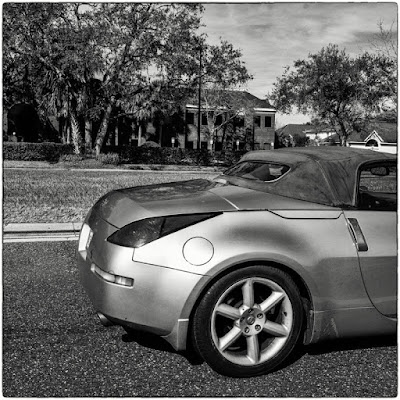 And yet, you know, one just keeps going no matter how horrible it seems to get.  Everything becomes the new normal.  I guess.  I mean, Trump's poll numbers keep climbing.  My little horrors mean nothing to anyone else, and slowly but surely, they mean less and less to me.

I've been taking pictures of anything, and the more I do, the more my vision begins to take shape.  I've been taking pictures from my car since so much of my time is spent sitting at red lights.  I realize it is a big part of my life and should be documented.  I figure you will recognize the dumb mundanity of it and the chaos but maybe some of the splendid beauty of it as well.  And while color is powerful, black and white is transformative, so there are choices.  I'll make them for us.

There is a big feature in the N.Y. Times today about Jimmy Buffet.  Big revelation--he isn't that guy.  Well, now, who knew?  I guess it will come as a shock to some drunken Parrot Heads.  The BIG reveal, however, is that Bruce Springsteen has never been inside a factory!  Jesus Christ--if Springsteen isn't authentic. . . .

And it's true.  Patagonia ™ made us want to go into the wilderness so we could wear those cool clothes and have the hipster outdoor zeitgeist.  Some of us, anyway.  James A. Fitzpatrick made me want to travel the world.

Almost nothing we want comes from some deep, internal seed.  Even our sexual desires are manipulated by the media, we are told.

Everything is bad, it seems.  We've been duped.

It is all Plato's Allegory of the Cave.

Yesterday I was beat, so I came home and curled up and stared at the shadows on the cave wall.  I started a new series, "Mrs. Maisel's Something or Other."  I can't remember.  O.K.  I just used The Google.  "The Marvelous Mrs. Maisel."  I am guilty.  I just want to be entertained, sometimes, allowed to just be pleasured.  Surely the show is a documentary.

There is fog this morning, both literal and metaphorical.  I must shake the cobwebs and get in touch with my factory self.  It gets more and more difficult every day.  But for now, it is a necessity.  For now, it is what I have.
Posted by cafe selavy at 7:58 AM