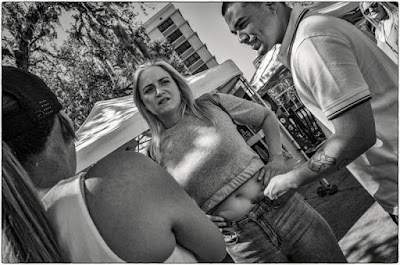 I haven't been sleeping well since I entered the last age group.  Last night was hell.  I want an early release from the factory.  I don't feel I have all that much time left to be me as I know him.  I'm not like other people, I know.  At least I don't think so.  No, I'm sure I'm not.

But financially I'm stuck.  I will have to work away my last vitality.  When I am done there, I assume there will be little left.  Just a shell with a befuddled grin.  Somebody else will be starring in what was supposed to be my movie.

Etc.  But it is horrible.

I can't tell what is happening in this photo, don't know if the woman is showing my much weight she has gained or lost.  The pointing man seems more gleeful than she, but that might be a trick of the camera.  I don't know what nightmares she might face.

I watched "The Florida Project" a couple nights ago.  Wonderful movie.  Depressing.  First time actors except for Defoe.  It goes to show that with three weeks prep, we might all be movie stars.  There isn't as much to it as people think.  Ask Q.  He used to make films.  Acting is easy.

The fictional people in the film, however, are America.  They are the majority that the middle class fears.  They are Trump's boogeyman.

The film never validates them.  That is its secret.  No Hollywood there.  Just the vast, uncompromising Waste Land.

And yet life goes on.  They continue.