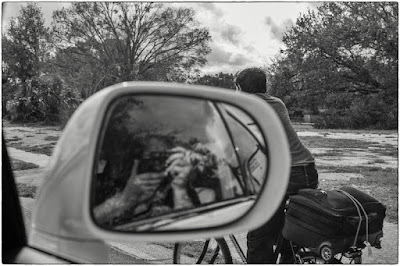 The problem: I am lacking equilibrium.  Not in my inner ear, but in my life.  There is nothing you can take for that, though many people try.  I did take a Xanax last night and slept through the night.  But in the morning, I am faced with the same (left unsaid) concerns that I had the night before.  How much of a life can you give away to palliate the fear?  Or maybe the better question is how much freedom can you stand?

I have realized one thing about my life.  It occurred to me just the other day, and I feel free to change my mind at any moment.  But, given the lack of stone tablets or any other evidence of truth beyond mere fact, I wonder why have I been such a liberal socialist in my concern for others rather than simply enriching myself?  It is not as if I like other people much.  I mean, I am pretty reclusive and avoid joining in a crowd.  Even when I do, I am the contrarian and usually piss somebody off or make them cry.  Mostly, people annoy me.  I enjoy them in the abstract in the form of literature and art (and sometimes music, though my tastes are narrowing greatly there), but when I meet the people who have created the works, they are such flawed and twisted characters that I don't want to know them, either.  You have to be selfish, I think, to create anything.  You must have large amounts of time alone, free time to do with as you want, to watch t.v. or surf the internet or simply sit and think, anything, really, until the urge to create is upon you.  Who wants to be around a person like that?  Not much, and not for long periods.  Just long enough, perhaps, for some witty repartee over a drink, or maybe for an occasional adventure or two that doesn't quite involve incarceration.

I also realized that my favorite people are irresponsible with money.  No, wait, I just changed my mind.  I have wealthy friends I enjoy quite a bit.  Many of my best friends, really.  And while they aren't selfish, they haven't minded keeping a bunch of the world's capital for themselves.  I, on the other hand, have enjoyed spending mine and have been, perhaps, too lazy to accumulate much.  I've spent my money on good food and drink and on travel.  I haven't spent money on cars or clothes or country club memberships.  I wouldn't mind them, of course, and am not against those things per se, but I've barely had enough cash left over to buy the cameras that I use.  And my Vespa was a steal coming in under a thousand dollars.

I should say that I have been influenced by people who are irresponsible with money.

Now, at the point I am in life right now, I think if I had more money, I'd have more freedom.  I may be wrong as I have never been able to test this theory.  But when I look around at my friends who do have it, they are able to do what they like.

Perhaps, however, they now have the freedom but not the imagination.  I don't know.  Obviously I am still working this out.  Or thinking it out, rather, for there will be no working it out.  It is what it is at this point, and I am going to have to play the cards I have.

Sometimes, like this morning, it just looks like I've played them wrong.  Seems I'm at the table with a losing hand.
Posted by cafe selavy at 8:02 AM