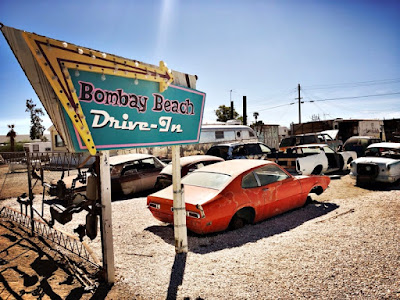 Poolside with coffee in the silent dawn, the hotel guests still sleeping.  Fingers crossed as I pushed the button on the coffeemaker.  The owner is so nice.  It is all set up.  It brews.

Yesterday after writing, I ate a yogurt.  But wait, there was more.  I had two freshly cooked, still hot, hard boiled eggs and a toasted bagel.  I want to live here in this hotel.  It is awesome.

Michael is the owner.  He is here day and night.  He bought the hotel last year.  It wasn't for sale, he said, but he made an offer.  When was this built, I asked him last night.  1936.  That is why he can have this lovely pool without a fence, he says.  He was grandfathered in, but that is also why the hotel is 21 and up.  Originally, this was built by the El Mirador resort to accommodate overflow as the resort gained popularity.  But when WWII began, it was converted into a hospital and so it remained (link). With its arches, I knew this was Philip Marlowe era.

After breakfast, I headed off to peruse the town.  I walked the Canyon shopping strip, but it was essentially nothing.  It was already hot and there were only a handful of people moving on the streets.  I took a few pictures, but nothing of circumstance, and after an hour, I got back into the car and headed for the Ace Hotel.  I almost stayed there.  I'm glad I didn't.  It is a place to get puked on by someone who heard it was a good party place.  The architecture is blah, and the people a rag-tag collection from Instagram.  I walked up and down the street and took a few snaps.  I have to say, the Days Inn looked as appealing as the Ace.  Everything did.

At noon, I decided to head for the Salton Sea.  My destination was Bombay Beach in particular.  The Salton Sea is a manmade catastrophe that gave hope to entrepreneurs looking to make a buck.  But the lake was not sustainable after its flow of water was cut off and so it became brackish and began to shrink.  The numerous resort businesses built on its shores were vacated.  Today, what is left is terrifying.  I had to take a look.

I stopped along the way to make photographs, but everywhere I stopped, I expected to be confronted by ghouls.  I was in the lowest region of the U.S., some 260 feet below sea level, and it was 110 degrees.  I would stop at some abandoned building and get out to make a photograph, but I always left the car running.  I was worried that it would overheat and I would be stuck, but I more, I wanted to be able to jump into the car and make a heroic getaway when attacked.  The air was putrid with the small of brine and death, the landscape gaunt.  Why was I here, I wondered?  Why was I here alone? 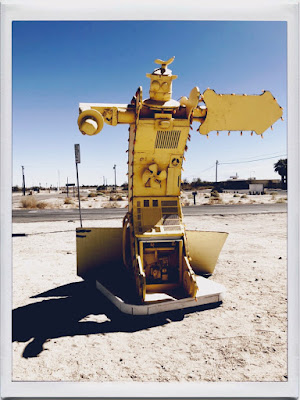 I came upon a functioning structure, the "famous" Banana Museum.  I have no idea what went on there.  A lone car sat in the parking lot.  I did not go inside.  I wanted to go.  Further.  I drove along the the shore of the lake, a road leading to a "park" of some sort.  I turned to go in only to find an entrance fee.  What?!?  People paid 6$ to drive along the nothingness.  There was no one at the guard gate to collect the money.  It was self pay.  It didn't seem worth it, though in retrospect I regret the decision.  How could I turn down an opportunity to experience God's destruction?  Maybe I couldn't face it.  I don't know.  I just did. 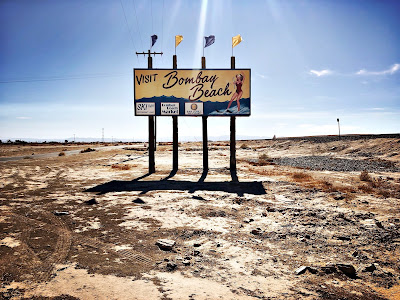 The Bombay Beach sign appeared like the apparition of Gatsby's Eyes of Dr. T. J. Ecklburg, garish advertising for the apocalypse to come.  It beckoned the innocent, the foolish, the easily deceived.  It beckoned me. 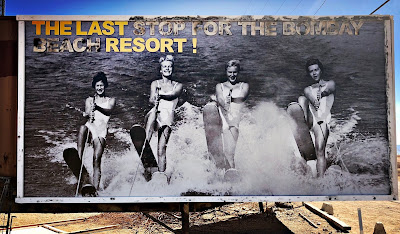 I turned down the road leading to "the community."  Another sign welcomed me.  "The Last Stop for the Bombay Beach Resort."  Beyond it was the town's commercial district, a restaurant/bar, a bar/grill, and a market.  One flew a black pirates flag, the Jolly Roger.  Two cars were parked outside. I wondered.

I creeped along the unpaved roads past abandoned trailers and lots filled with every sort of junk imaginable.  Rusted cars sat in the driveways of trailers with busted windows and busted doors.  I stopped and got out.  There was no sound, just the terrible smell of salty death.  Looking around, I crawled through a fence entered one of the ruins.  I didn't breathe.  I wanted to hear the attack whether it was from some crazed criminal biker, his pit bull, or a mass of undead zombies.  I am not easily spooked, but this place got inside me.  It was as I imagine Chernobyl to be, abandoned in an instant, preserved in some historic moment.

I got back into the car and creeped along.  I guess I imagined at this point that I was in some weird museum, for I stopped and walked into lots again and again.  Then I heard someone in a trailer next door.  I realized that an air conditioner was running.  Jesus Christ!  Who the fuck lived here?  This couldn't be good.  I was nowhere.  There were only these people.  When the shit came crashing down, there would be no one to help me.  They could easily make my car disappear.  The motor was running, the keys inside. 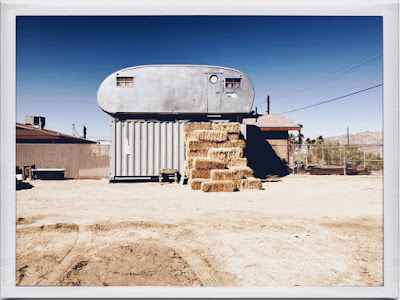 I tiptoed back to the car and got in closing the door with a whisper.  It was true.  People lived here.  It was not the museum I believed.  I drove on, still stopping to make pictures but from the road rather than in what apparently were people's homes.  I saw no one.  Then, a lone bicyclist came toward me.  I drove by.  It was a young woman, a hippie in a midriff.  Don't be a pussy, I thought.  Take her picture.  It is too good to pass up.  So I turned the car around and drove up beside her.  I asked her if she minded if I used her riding her bike in a photograph.  "What's it for?" she asked with sleepy eyes and a drowsy smile.  "Just my vacation photos," I said realizing right away that sounded stupid.  "You from here?" she asked.  "No. Are you?"  "Yes. . . well, my parents live here."  I tried to picture them.  Was she here on vacation?  Nothing was making sense to me and I was getting nervous that some Zombie Police were going to arrive any moment.  "I don't really like having my picture taken," she said, and I said O.K. with both disappointment and relief.  "It's really hot," she said, and I agreed.  So why was she riding her bicycle around in the hottest part of the afternoon?  Nothing made sense here.  Nothing.

Eventually I left with a feeling of relief.  I've never been spooked like that, and I left haunted.  I wanted to go back, though, wanted to go have a drink at the bar, wanted to find out why people lived in such a forsaken spot, why they made such strange things, such odd objects of art.  I wanted to, but knew the chances were slim.  But maybe, I thought.  Maybe.

It was late afternoon.  I had to make a decision.  Did I want to go on another tour or did I want to return to the hotel?  I was hungry, having eaten nothing since I left the hotel that morning.  I was heat worn, and I was parched.  The idea of a drink beside the pool was too inviting.  The hotel it was. 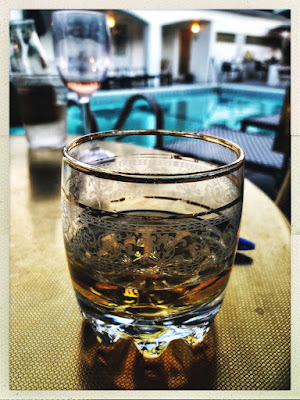 I was not wrong.  It was a capital idea.  Mathew brought me a glass of rose and some petite bites on a tray.  It was hot, and after my wine, I put on my trunks and entered the pool.  Yes, I affirmed.  I am older and smarter now.  I know to enjoy what I pay for.  I know better than to run myself ragged while luxury beckons.  A dip, a shower, and a scotch.  the sun began to set, and the other guests began to prepare for dinners.  I sat and wrote and drank and thought.  I cooked up these phone pictures and texted them to friends so they'd know I was living a large life.  I deserved it, they kindly responded.  I had a rough summer, a rough year.  That's what friends say.  That's what friends do.

And I sat longer.  All the guests were gone now, and Michael came out make a picture of the beautiful end of the day.  Yes.  So would I. 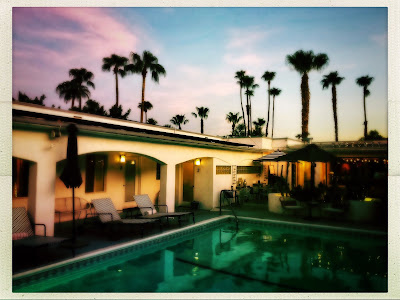