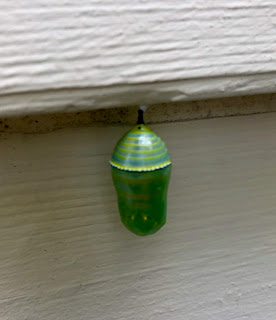 My laptop crapped out, so I've been posting from my phone.  I only say that to explain why I have been making so many errors.  I can barely see the things I type.

Exciting weekend.  We had a Monarch caterpillar attach to the underside of one of the boards siding the house.  We watched it form a chrysalis a couple weeks ago.  It took about two weeks, but yesterday, it "hatched."  We made a video of it.  It happened quickly.  Then it hung on the house.  Ili said it would take a couple hours to dry, but the day turned cold and gray, and it was still hanging there at nightfall.  When she got up this morning, Ili went to check on "Chrissy" as I called her.  She was still there.  Ili, the worrying type, feared that she was dying.  "I'm going to give her" (it is a her) "some nectar," she said.  I was in a hurry to get to my physical therapy and left Ili to her tasks.  When I got home an hour later, Ili was sitting in a chair facing the wall.  There was an extension cord hanging from the outdoor plug.  On the ground was the heating pad.

"Uh. . . did she have any help?"  I saw the cotton ball stained red with hummingbird juice on the ground.  The butterfly was on the heating pad.

"I put the heating pad on the ground, and she climbed up on it."  She showed me a video of just that.

Just then, little Chrissy began flapping her wings.  She was beautiful.

On my way to the factory, I got a text that little Chrissy had flown away.

Great tale, eh?  This is the sort of excitement I have now.  It is fun and fascinating.  We've put up four bird feeders and have learned all the bird calls.  We watched a squirrel build her nest in the camphor tree.  New leaves have exploded all around us.  We have coffee and/or cocktails on the deck morning and evening watching the world around us.  It is beautiful.  It is fun.

Oh. . . and I have begun taking photographs again, too.  That is a good sign, I think.  Just a tad more energy than I had before.  I will make vernacular pictures now.  You'll see. . . soon enough.

Until then, I'll be the guy with the Jane Hathaway birding outfit and binoculars.  You'll see me when you walk by.  I'll wave.
Posted by cafe selavy at 3:14 PM