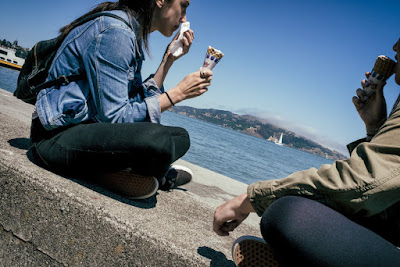 Maybe.  Maybe not.  That's what the experts say.  Predictions are changing.  Predictions.  They are opinions basically.  Like academic opinions, they are supported by data.  The problem with predictions is that we don't get to see the data.  They just give us spaghetti lines and cones of uncertainty.  All of this is based on math.  I want to see the math.

Whatever.  I don't want the hurricane to hit someone else, but I sure don't want it to hit here.  Nothing can withstand it.  Nothing.

I think of you all sitting in the end of August weather, the hint of fall around the corner, planning your  Memorial Day weekend.  I see it in the N.Y. Times.  Bucolic days at beaches and in the park.  Ooo-la-la.

I watched the new Dave Chapelle comedy special on Netflix last night.  He is the bravest comedian alive.  He expresses what a lot of people think.  Many of you will get pissed off, at least at some part of it.  I liked it all.

He says he understands how white people felt when they saw the terrible crack epidemic in the black community now that poor whites are dying from heroin overdoses.  He really understands it now.  He doesn't care either.  I figure that is how people in New Mexico feel about the hurricane.  It's awful, but really. . . .

Watch the Chapelle thing.  It isn't necessarily funny.  But it is.
Posted by cafe selavy at 7:35 AM