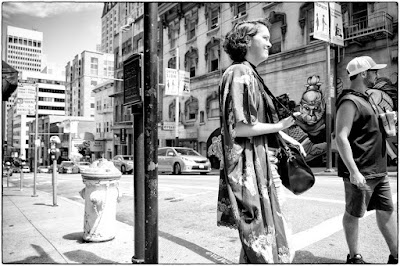 I may get arrested in Paris, or so I've read.  Photography isn't illegal, but taking pictures of people might be.  France has strict privacy laws.  Taking pictures of people in the street has become very contentious everywhere in the social media era, but it is especially contentious in Paris.  Again. . . so I've read.  It depend on who you are, I think, and somehow I am suspicious.  The woman pictured above in the flowy thing and the smile probably doesn't get yelled at. 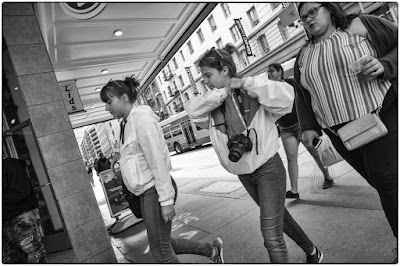 Nor does this woman, probably, with her posse of bodyguards.  Cameras are ubiquitous.  But an old white guy with a camera. . . well, I garner much attention.  If I were younger, perhaps I'd get hassled less.  But OGWC syndrome is difficult to overcome.

Pictures are the universal language.  Everyone in the world understands a photograph on a literal level.  It is the most basic form of communication.  We know the late 19th and all of the 20th centuries through pictures.  History is written by them.

Are we to only know the 21st century through selfies?  These are superficial and self-conscious times. 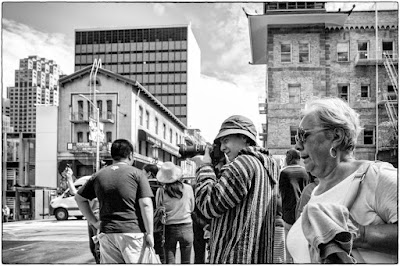 I was in jail in Italy once.  My girlfriend ran over a British woman's foot driving through a marketplace.  I've told the story here before, so I won't go over it again.  Sitting in a "foreign" jail is unnerving.  You don't know the rules.  You are at the mercy of people whose culture you don't really understand.  We were out in a couple hours, so I am not saying that I am an ex-con, but I've had the beginnings of such an experience.  I don't wish to go down that road any further.

So I'll be careful.  I wish I had the Leica M10-D.  I've toyed with the idea of buying one.  It is digital, but it has no viewing screen.  It has its advantages.

"Did you take my picture?"

Even if you did, the statement is symbolically true.  My standard response is, "Not you, really, just a figure on the street that represented something greater than the individual, really, more a figurative 'type' than something specific."

I could just shoot film, of course, but maybe I'll buy that M10-D before I go.
Posted by cafe selavy at 8:28 AM