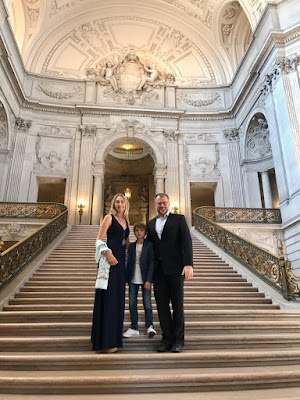 My buddy, Q, got married, I think.  I can't quite make out what he is saying in his latest post (link).  Everyone was grateful to him.  He made people happy.

I don't know why he had to deride me, though.  He is wrong.  I LOVE this photograph.  I am blowing it up and putting it on my wall beside the ones I have of him when he first moved to NYC.  Underneath it will go the letter I wrote him when he turned 35.  That was back when I was his age and he used to try to give me a beat down every chance he got or when he got drunk or high which was most of the time, I think.

This is truly my favorite picture of Q.

But he won't like that, either.  Sometimes, there is no winning.

Which brings me to my REAL topic.  I am a good person, I think, but often not a good friend.  It is not that I am a bad friend.  I just don't think about the things one should think about.  Like birthdays.  I just missed Q's.  I know that because I read his blog.

And I feel very bad about it.  Don't tell him, though.  I will send him a belated gift.  Probably.  I already sent him a birthday gift about four months ago, I think.  At least that is what I told him it was.  The problem is just that I don't think about other people's priorities enough.  Birthdays are important to people.  Not the birthday, per se, but the remembrance of others.  I mean, the remembering.  But I hate birthdays and most other celebrations that aren't  Christmas.  Birthdays, Thanksgiving, Easter, Valentine's Day--they cause me deep anxiety and misery.  My own birthday is fucking nightmare.

That doesn't mean I don't love my friends (or myself).  I just hate the prescribed celebrations.

Q asked me when my retirement party was going to be.  Really?  Just what I want, recognition that I have outlived my usefulness.  Nope.

I have been going through my "files" this weekend.  I cleaned out a closet so that Ili could have it for her professional lady outfits.  When I quit working, that is going to be where the money comes from.

The closet was filled with containers of old letters, dissertation notes, and photographs.  Thousands of them.  I put together my new 15 drawer flat file cabinet and am beginning to organize my ouvre.  It is terrifying.  Anyone want to buy a masterpiece cheap?

Which reminds me.  I gave Q one of my favorites that is odd but not revealing, but I think he stuck it in a closet or under the bed or something.  That is what happens when you give things away, though.  They haven't much value.  So, I'd rather burn these than give them away, but for you, my friends, I give a special price.

Going through the pictures has been both a joy and an agony.  That is, really, a revelation.  I bought my own expensive camera and began taking photos before I ever took a photo class.  I'd forgotten that.  I had a Kodak book on how to make good pictures.  The photos look like the ones in that book.  But early on, I was experimenting.  In my second photo class with Jerry Uelsmann, I was shooting 4x5 photos and solarizing them in the darkroom.  Fucked up a lot of negatives, for sure.  I can hardly remember it.  But I remember the people in the photographs.

I was like this early on.  It didn't develop later.  It was suis genesis, not instilled externally.  Strange.  I can only blame myself.

There are boxes and boxes of stuff.  It will take me months to get through it all.  I discarded hundreds of crummy old photos yesterday.  It was not difficult.  There will be more.

I will probably be posting some as I scan them.  There will be much for Q to deride.

I like to make him happy.  I almost said "give him pleasure," but I would pay the price for that.
Posted by cafe selavy at 6:45 AM