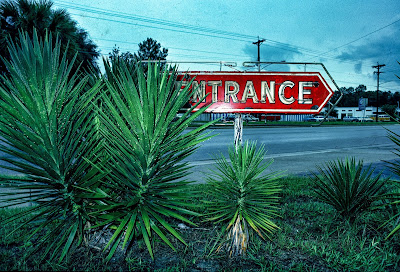 I'm trying to write this from a coffeehouse.  Bad idea.  It sucks all to shit.  But I've been fucking up all day, anyway, so this is just another fuck up in a sequence of fuck ups.

I had some film left to shoot on the ends of two rolls, one on the Leica, one on the Xpan, so I thought I'd go out on this cool and cloudy day and finish them up.  I drove slow, and when I saw something of interest, I made myself stop and get out.  At first, I wouldn't stop saying it wasn't so good anyway or that I'd get that picture on the way back.  Finally, having had enough of my bullshit, I turned around, got out, and made some pictures.  Cool.  Easy-peasy.  I did that all the way down the highway, stopping, parking, getting out with cameras, shooting.  On the Leica, I was shooting with a flash hoping to get some of the effects I had in 1978.  Should work, I thought.  I got to the photo store with a few more frames to shoot, so I decided to walk around the block.  I saw a fellow in a red and white exotic sports car with the top down, and I ran toward the stop light hoping I could get a shot.  "Sure," he said, and I bent down with my 28mm lens and the flash, and Bingo, it was bound to be a classic.

It was the last frame, so I walked up the block to find an easy place to change the film.  I was excited. . . so excited that I took the bottom plate off before I'd rewound the film.

I'd made a rookie mistake.

Let it go, buddy, you can't do anything about it now.  Let it go.

A fellow in a truck sitting in the parking lot next to me started yelling to me out his window.  He was jabbering about cameras and the camera store. . . I don't know.

No matter what I did, I couldn't get the bottom plate back on.  Jesus Christ, and the idiot just kept rattling on.

"Can you hear this?"

He turned up his radio so that the little speaker in the dash sounded like a washing machine on spin.  He was grinning big, bouncing his head up and down, I assumed, to the beat of the music.

"You know this song?"

He started singing the words to some '80s rock.  He was grinning like a maniac.  I was beginning to sweat.  What the fuck?

Finally, a woman walked up.

""Here comes the wife," he said with emphasis.

"Well, there goes all the fun."

She turned and gave me a quick look.  Then, without a goodbye, the truck pulled out into the highway and was gone.

The bottom plate slipped on without any problem.  I don't know what I did, but since I had the film in, I thought I'd walk around and shoot it up and take it in with the other film.

For an hour, an hour and a half, I walked around Viet Town, past faded buildings and through vacant lots, shooting pictures that excited me.  Surely these were masterpieces.

When the roll was done, I headed back to the photo store.  At the car, I went to rewind the film.  There didn't seem to be much tension, and pretty soon, there was none at all.  Really?  Really?

I was pretty sure the film had not advanced.

Inside, I explained to the new photo processor who was just learning about me that I didn't think two of the rolls were going to come out.  I pulled out my Xpan to take the film out and immediately drew a crowd.

I decided to buy some more film since I'd had so much fun so far.  $64.00.  Before processing.  Why would I shoot digital?

Now, I sit with hipsters and losers drinking my cappuccino because I thought I would be a loser to simply go home.  I spent the entire day there yesterday.  Somehow, my self-esteem was at stake.  But here I am on a computer drinking an expensive coffee like all the others feeling like an idiot.

It has been a pathetic day, and yet, I feel O.K.  I got out and shot film even if there is nothing to show in the end.  I've sharpened my senses, and I made masterpieces, even if nobody will ever see them.
Posted by cafe selavy at 6:15 AM