A Bad Day, A Worse Night 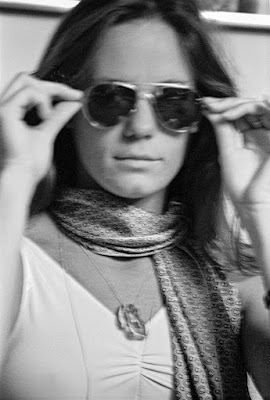 I am utterly destroyed tonight.  Utterly.  I went to work today to finish up unfinished business.  I needed to correct some payroll issues so that people could get paid, write some employee evaluations, see HR about what I must do on my way out the door, go to accounting and turn in my company corporate credit cards, and then, all alone in the building in the late afternoon, continue throwing away everything in my office.  I just can't deal any more.

And that is what I did as I walked down corridors, between offices, knowing I have one official week remaining.

When I left in the late afternoon, I teared up again.  And driving home.  Twice.

When I got home, the cat was there to greet me.  She is getting more friendly all the time.  Her boyfriend is the domestic cat next door.  He comes to look in the bottom panes of my kitchen door, and she has begun to copy him.  Now she is jealous and doesn't like him to come to the door.  She bullies him away and then looks in.  I have begun to feed them both.  I can't not.

After work, I thought about stopping into a once favorite bar to have a drink, but sitting alone at a bar on a Friday seemed pathetic, so I ditched the idea and came straight home.  Sitting on the deck with the two cats and a scotch, I was feeling lonely and thinking sad thoughts about both the past and the future.  I didn't want to cook.  I am tired to death of cooking for one.  I decided to go out for sushi.

It was depressing sitting at the counter eating alone.  Nobody else was alone.  It has never bothered me in my life to be out alone, but just now it does.  It pisses me off, but it is true.  It does.

I had forgotten to take my phone, and when I got home, I had a text from a woman I work with.  She is not in my department, but we have become good friends.  She is a kid, as they say, or was when she started working there, and we became close.  Over the years, she has married and had a baby, but she is really still a kid.

Her text set me off.  She said that she was sitting in her office thinking that I only had one more week left at the factory, and she was crying. Yeah, I wailed like a baby at that.  I really have a big soft heart when it comes to me.  Sarcasm.  I know what I'm saying.

Later, she texted me again.  She was having drinks with a girlfriend.  She asked me if I remembered a girl by name.  Oh, did I!  She was a girl who used to come and sit in my office in the mornings before. . . oh, shit. . . I need to reveal something to tell this story, and I don't know how to get around it.  Oh, fuck. . . I can't do the reveal just yet.  Can this story keep its impact?  Shit, shit, shit.  This girl was very special to me.  She was beautiful, so beautiful she needn't be anything else.  But she could be.  And my job, as I saw it, was to inspire her to be so.  And it was working.  She would come into my office in sweat pants, her dirty blonde hair pulled up in a sloppy bun, and she would drink her coffee and tell me about what she had done or what she thought about doing in the subdued light by the slim office window.  And she would ask me succinct questions about the things she was reading, insightful, really, and it was hard to believe that someone so beautiful would put the effort into that.  I had a beautiful girlfriend at the time with whom I was terribly in love, so there was a Damocles Sword between us, but there was something else, too.  She was in every way spectacular.

One day, I was sitting in my office when the phone rang.  That's the way they say it in the old detective novels.  It was "the girl."

"Oh, I'm just lying in bed while my brother gives me a bath."

She had been in a car wreck and her neck was broken.  She was all kinds of messed up.  My heart stopped, then started and fell.  I said the things I felt and the things I needed to say, but you know how that goes.  When we hung up the phone, I was wrecked myself.

In the following days, I began to get letters from her.  Many.  And when she got better, she came back to town and rented a place on the same street where I lived.  I would stop in and see her.  She was frail, not as she was before.  And she wasn't going to school.  She was a bartender now, and she was dating a guy I knew from playing in a band.  He was a musician and a druggy, and now she was, too.

Since I was living with my girlfriend, I couldn't stop in as much as maybe I could have or should have.

And then she was gone.

Cleaning out my office these past weeks, I came upon her letters.  I'd kept them all this time--more than thirty years.  It was still a thrill to hold them in my hand.

Of course, they came home with me and are in my desk drawer at home now.

So tonight, when my friend mentioned her name, I was happy.  I was very special to her, my friend's friend confided.  She talked to her about me all the time.

My friend texted me a picture of her from her work website.  It is not the same girl I remember, of course, but she is doing well.  After she cleaned up from her rough spell, she graduated from a good college and everything began to click.  She never married, I was told, and lives in Santa Barbara.  Her friend reports that her life is fabulous.

Well.  What can I say.  "Tell her I am a cripple and retired and a recluse.  That should make her chuckle."

The excitement of that is over now, and I have had too much to drink and my head is beginning to throb.  I'll probably be tearing up again in a bit.  And here I live in a state without marijuana dispensaries.  WTF?

Oh. . . the picture.  That is my "it" girl from 1975, my Edie Sedgwick.  I was going to write a post about her, and started to, but the text came in while I was writing and my attention shifted immediately.  I will write about her tomorrow, I think.  I have other photographs.  They can wait until then.

Update: my traveler/art collector friend said he knew a girl by that name.  She used to date one of his friends, someone I know, too, a very good artist.  She used to be around his studio and at the art openings all the time.  I texted back and asked my friend if it was the same girl.  It was.  Holy shit, what strange small circles.

For unknown reasons, I felt smaller.

Sarcastically, my buddy texted, "She probably thinks about you all the time."

My dead ex-friend, Marlon told me once, "The trouble with you is that you want a woman to think about you all the time.  Fuck, you are lucky if she is thinking about you when she's with you."

We know that's true.  It's good to have friends to keep you grounded.
Posted by cafe selavy at 6:58 AM