Even Under a Full Moon 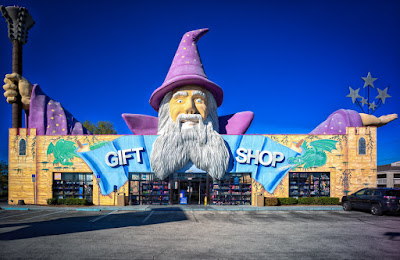 My birthday is over, and I feel good about it.  I got up in the morning and did my usual things.  My mother sent me happy birthday wishes over the internet and then called to me to sing.  When it warmed, I went to the track to "run."  I gave myself permission to stop whenever I felt like it which was a good thing.  The day was gorgeous, cool and bright and cloudless.  After "running," I came home to shower and make an easy, healthy lunch.  I sat outside and ate tuna salad and drank wine.

The afternoon drifted on.  I got a happy birthday text from Q saying that I should get something in the mail that afternoon.  I wondered if he didn't know that they don't deliver mail on Sundays.  Ah. . . but Amazon. . . . He sent me a blues harmonica set in the key of A.  I took it out of its case and started playing it like Bob Dylan.  Anyone can play a harmonica like Dylan.  Playing like Little Walter, Jimmy Reed, or The Harmonocats is a very different and difficult thing.

I wanted to try using my Polaroid conversion 4x5 camera that I sent money to Australia to have constructed the day before Polaroid announced it would no longer make the Polaroid film.  I really haven't used it since.  But I was lazy and slow and have many ways to avoid doing things that take effort.  Around two o'clock, however, I pulled out the camera, film holders, and chemicals, ran through the steps of setting the camera and making an exposure a couple times, then loaded the film and photographed my birdbath for the hundredth time.  I flipped the film holder over and made the same exposure again, for what reason, I don't know.  Then I set up my little dark tent on  the patio table, put in a tray full of monobath developer, and rocked the film off and on for six minutes.

When I pulled the film out, I couldn't tell what was on it.  So I developed the other negative.  Same thing.  I realized that something wasn't set right on the camera.  I tinkered with it and tried again.

I found something unexpected in the closet the other day.  I am finding lots of things since Ili moved. I don't know if this was hers or something I had for a long time, but I kind of remember that it was hers.  Whoever, I decided to use it for a picture.  I hung it in a tree where the sun was shining and snapped.  Developed.  And boom. 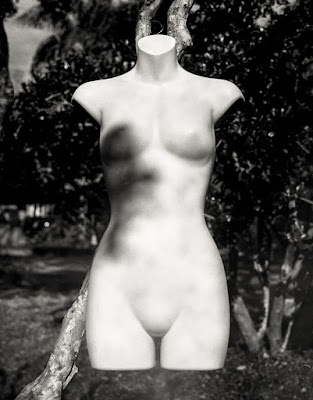 I know.  It is a stupid picture.  That is why I put the color wizard picture at the beginning.  It is not a satisfactory picture, either, but I am out of things to post.  It was impossible to center the building if I wanted both his hands to show with a little border, so the whole thing feels off.

But back to my birthday.  It was past time for the little birthday party my old school gang was having for me up the street at my favorite bar, so I put everything in a pile in the living room, got dressed, and left the house, calling my mother on the way to tell her I'd be over afterwards.  There was a crowd when I got there, hats, trinkets, and cards.  I ordered a G&T and tried to relax, though being in crowds always makes me nervous.  These were my peeps, though, and they wanted me to remain so even though I am no longer part of the factory war.

After a couple hours there, the party began to break up, and I walked out to the parking lot with my former secretary with whom I made dinner promises.

My long-expected cousin had finally arrived from Ohio.  This had been my mother's main concern, and there was little fanfare over my birthday.  Per usual.  We hillbillies are not a laudatory or
loquacious lot when it comes to celebrating, so I took a seat and chatted as my mother made a usual dinner.  Nothing special.  There was a small cake with no lettering.  She didn't want leftovers.

After dinner and after conversation, I was tired and ready to go back to my house.  I felt pretty worn out.  My mother and cousin walked me to the car to look at the moon.  The sky was clear and you could see the stars.  The moon was big and beautiful.  My moon.

At home, I brought the cards into the house.  At the party, the fellow who has taken my job had borrowed my keys to put some thing in my car.  There was a bag with a present.  I opened the envelope first.  He had written me a two page letter, a stunning tribute, really, about our relationship over the years.  I was truly stunned as I always had the impression that he just humored me because I was his boss.

Then I opened the bag. . . and HOLY SHIT!  He and his wife had given me their Rollieflex camera.  I couldn't believe it.  He had shown it to me at a party some years ago, and I informed him that it was worth a lot of money.  It had been given to his wife, he said, and they really didn't know.

It was too much.  Way too much.  I was tired and a little drunk, of course, but I needed to write a thank you to him for this.  And I needed to thank my friends.

When I was done, I fell into my bed.  I didn't take anything to go to sleep.  I simply lay down in my bed, closed my eyes, and let my mind go.  I didn't wake until after six, a long, uninterrupted sleep compared to that of recent weeks.  Even under a Full Snow Moon.