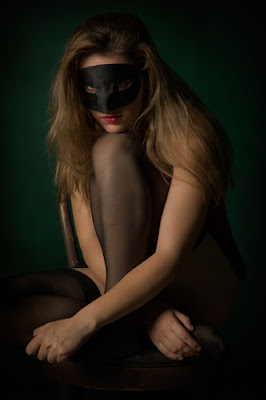 Friday went like the rest of the week in that the novelty of retirement was replaced by reflection.  I spent the morning preparing the house for the wrecking crew, then went to the gym.  I had a lunch date for one o'clock, so I got ready, read for awhile, then went to pick my friend up at the train station.  I was taking her to the Spanish restaurant where I could get the good ceviche.  She asked, of course, how I was doing, and over food and drink, I regaled her with wild tales of my disastrous life.  I hardly shut up.  Poor girl, she didn't know what she was in for.  Maybe she did.  She is a sociologist, so I would guess she might have been prepared.

We talked about her, too, of course.  Her father is in an assisted living facility in another state, and she goes to visit him every chance she gets.  She, like me, is an only child and lives alone, and she said that seeing her father was a bit of a glimpse into the future.  I knew what she meant.  And so I spoke of Anthony Bourdain and the decision not to suffer through certain fates, talked about how difficult it would be to actually commit suicide as most avenues were unattractive.  No guns.  No nooses.  No heights.  No gas.  There is only one way, really, I said.  Phenobarbital.  It used to be a common sleeping pill. That is what the stars use to overdose on, that combined with alcohol.  It is related to pentobarbitol which vets use to euthanize animals.  Either one, I said.

Nice talk.  We ordered another drink.

I tried to make sense of what I felt.  I told her that the first two weeks were an adjustment, but now I had to face the void.  I told her that after the accident, I had stayed very positive, and every day I worked to get better, to get whole again, and that every day I was making gains.  But that is over, and now I've plateaued and the optimistic high is on the wane.  I said that, too, I was faced with my own inabilities.  When you live with someone, it is easy to think they are impeding your artistic genius, but when they are gone and you can't produce anything, you are stripped of your excuses and your illusions.  And one can't live without illusions.

I asked her if she had read or seen "The Iceman Cometh."  She hadn't.  Illusions are the central idea of the play, I said, it's spine, and it wonderfully illustrates what happens when we lose them and are forced to face reality.  Not good, I said.  Later I would reflect that this was a major theme in American theater after.  Willy Loman in "Death of a Salesman."  Tom in "The Glass Menagerie."  Many other Williams' plays, too.  That is what I was facing, I told her.  I was going to have to adjust and find some new illusions to sustain me.

She looked at her watch.  We had missed her train and would need to wait a while for the next one, so we ordered another drink before I took her to the station.

It was late afternoon moving toward early evening when I got home.  There was nothing to do but have another drink.  I fed the feral cat, called my mother, and sat on the porch as we chatted.  But it was chilly and getting colder, so, driven indoors, I began looking through the pile of unread books I held onto out of all I gave away.  I picked up the first one--"The Jungle and The Damned," by Hassoldt Davis.  I read the intro. 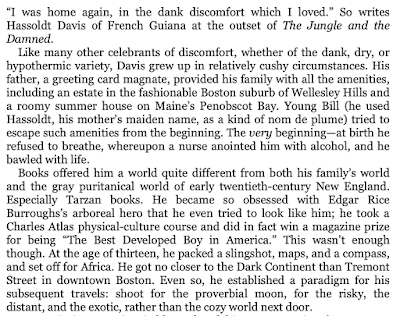 Holy smokes.  This looked fun.  I didn't remember buying the book.  I have three friends who consistently give me books, C.C., Q, and my travel/art friend.  This seemed like a book I might have gotten from the latter, so I did a Google search and found the intro on Amazon, cut and pasted it, and sent it to him to see.  He didn't remember whether he did or not, so its origin is still a mystery.

I read a little bit of it, then decided to fix a quick dinner--a microwavable frozen vegan organic taco bowl and a can of chicken smothered in hot sauce.  A little news.  Then something on YouTube, I think.  I don't remember clearly.  I woke up drink in hand.

When I got up this morning, my neck was hurting.  Badly.  Something I did yesterday in the gym.  Looking down at the computer screen as I write this is painful.  It is just the punctuation mark on this past week.

There has been no consistency in this post.  It has bounced around like a super ball in a very small room.  I'm in pain and my nerves are shot.  The day is clear and cold.  Maybe I'll feel better.  Maybe I'll go out and find something to sustain me.  Perhaps there is an illusion waiting out there just for me.
Posted by cafe selavy at 9:01 AM